If you are interested in ACBL demographics, take a look at Club Table Counts Revisited. You can even download the data and crunch the numbers yourself.

The unit holiday party was held on December 29 at the Soledad Club and catered by the French Gourmet. We had 23 tables.

Celebration of Life for Bette Cornelius 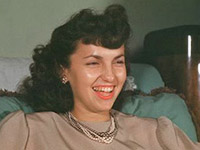 Bette Cornelius passed away on August 5th. Jill Seagren, with help from the unit, hosted a Celebration of Life for Bette before the September 22nd unit game. Listen to the speeches and see the pictures from the slideshow on Bette’s memorial page. 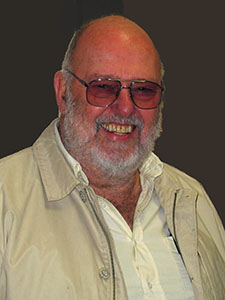 Ron Huffaker passed in his sleep Tuesday September 10th. He will be missed!

Ron was a strong player who usually partnered with his wife Mary and less frequently with his brother Harold. In 2009, Ron and Harold won the Mini Blue Ribbon Pairs at the fall NABC in San Diego. In recent years, they often teamed with Elaine Chan and Mike Mezin. Mary and Ron’s contributions to hospitality are uncountable.

Ron was acquainted with Mike Lawrence at Berkeley around 1970 when four card majors were still the norm. He only converted half way. 1♠ promised five but 1♥ only promised four. The Huffaker’s 1♥ openers have picked off more than a few of their opponent’s heart suits. Among other things, we are losing a bit of bidding diversity. But at the table, Ron will be remembered for his card play. Like Lynne O’Neill, Ron played the spots off the cards.

Elaine Chan is now a Sapphire LM (3,500 MP). Jill Seagren and Carol Abramowitz are now Ruby LMs (1,500) and Deborah Goldsmith achieved this rank as well a month earlier. These two ranks were added in 2015.

The San Diego and La Jolla units are once again held a joint non-life master (NLM) sectional at the Lawrence Family Jewish Community Center on Executive Drive in UTC, Friday and Saturday, October 25–26. There was plenty of parking and $5 lunches were available each day. This tournament will used electronic scoring which means all results will include the contracts and opening leads. Note: you must not be a life master and must have fewer than 750 masterpoints to play in this tournament.

Quite new to bridge and not yet sure you are ready for a tournament? We have a separate 0-50 masterpoint pairs event just for you!

Our annual meeting and election was held on August 11th. It would normally have occurred on the second Sunday of June but it got displaced by our sectional which we were unable to hold on Memorial weekend due to scheduling issues.

The Soledad Club and the La Jolla Beach and Tennis Club (LJB&TC) are now posting their results on Bridge Results. See the Soledad Club and LJB&TC calendars respectively for the results of each club. This improvement means the hands will be included with Monday and Wednesday ACBL sanctioned games and the LJB&TC games, all of which use predealt boards. However, contracts and opening leads will not be included because neither clubs is using an electronic scoring system.

Want to call your partner’s attention to a specific board? Now you can do this in Bridge Results by adding &board=# URL parameter to the end of the event URL. For example, try pasting this into a browser:

The combination of ACBLmerge and Bridge Results has spread widely in San Diego. Adventures in Bridge, the San Diego Bridge Club, the Eastlake Bridge Club, and the La Jolla unit, use ACBLmerge directly to post results, integrating hands, contracts, and opening leads. The San Diego unit, the Soledad Club, and LJB&TC are all using Bridge Results which is partly based on the ACBLmerge work but includes extra presentation benefits for players while making the posting of results easy. The Bridge Academy and Redwood clubs are using Bridge Composer to post online results which also include hands, deals, and opening leads. Together this puts San Diego way ahead of the most of the ACBL.

Board member Gail Dunham became a Gold Life Master (2500 MP) during the San Diego regional. Freda Anderson brought a fancy cake to celebrate the occasion at the May 12th unit game. Congratulations, Gail!

Adventures in Bridge (AIB) was forced to relocate in the spring after a dispute with other shopping tenants over the use of parking and a subsequent visit by the San Diego fire Marshall who deemed the facility to be too crowded. The owner Wirt Gilliam says both these matters were discussed when he negotiated the lease and that he had two witnesses to these negotiations. After being shutdown for several weeks, AIB reopened at 9025 Balboa Ave, a bit further east, but with the limited schedule of a Friday night game and Saturday open and 1999er barometer games. Wirt is looking into expansion options.

Meanwhile, the Soledad Club added an ACBL sanctioned game on Wednesdays at 11:30 am starting on April 10th with Kathy Moyer as director.

2018 Mini-McKenney and Ace of Clubs results

The Italian Blue Team (“Squadra Azzura”) dominated world bridge for over two decades, winning 16 world titles from 1957–1975. They were long dogged by accusations of cheating that were never properly investigated by the World Bridge Federation. Recently, Avon Wilsmore meticulously combed through the tournament records and presents a strong case that the team cheated in his forthcoming book Under the Table (The Case Against The Blue Team). Avon presents many details in his lengthy Bridge Winners article The Talk That Never Was: The Blue Team Rule.

As a both bridge player and a student of statistics I find the evidence damning even from the article alone and expect that the book will drive the nail in the coffin. Kudos to Avon Wilsmore for his heroic effort.

Maritha Pottenger has a new series of short form bridge writings which she calls “teaching points” based on bridge mistakes she observes around town. If you ask, she will include you on her e-mail list and send them to you a few times per week. The La Jolla unit is also collecting these online, with plans to add new batches every couple of weeks. Maritha writes quickly in bridge shorthand. Thanks to the Maritha Automated Rectification in Translation Helper Accessory (MARITHA) software, the versions posted online are automatically translated to semi-formal bridge writing, complete with suit symbols and other niceties.

Maritha has also created many one or two page bridge handouts in the course of teaching bridge in the San Diego area for several years. 42 of them are available online in PDF form.