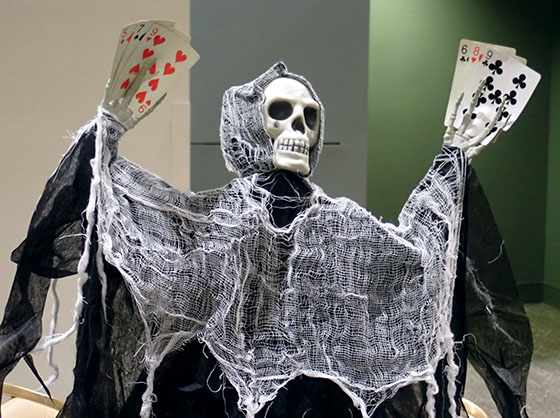 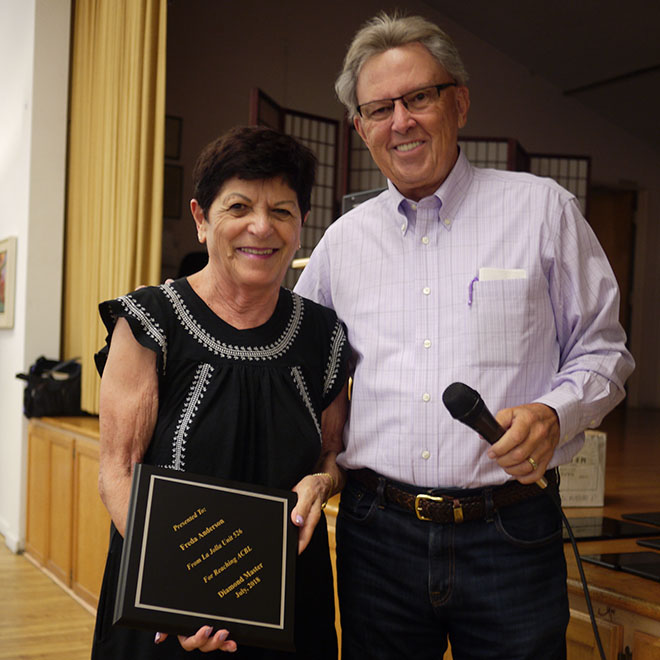 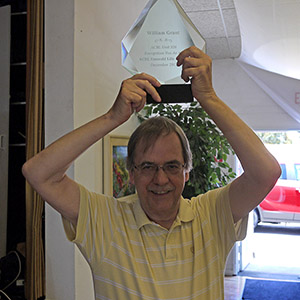 Bill Grant reached Emerald life master (7,500 MP), the first in the unit to reach this rank since David Abelow last year. Bill is a great player. In presenting the award, unit president Matthew Kidd remarked on Bill’s aggressive preemption, which makes him a fun partner and a dangerous opponent, and also Bill’s many dodgy 3NT contracts that nonetheless come home more often than not.

Bill’s long service to bridge is also impressive. He has served on the La Jolla unit board at least ten years, perhaps closer to twenty. He has also served on the district board, including a year as D22 president. Bill has co-chaired the San Diego regional for ten years, starting with Alice Leicht and mostly recently with Lamya Angelidis this spring. And finally, Bill was a strong force behind the creation of the La Jolla unit’s successful ten year bridge teaching program at La Jolla high. It was Bill during his days as a high school calculus teacher who identified the otherwise nearly wasted three week period following the AP exams but prior to graduation, as an ideal time to teach bridge to high school seniors. He had started to teach his students at Chula-Vista high and encouraged the unit board to launch a similar program within the unit.

The unit board has ten members with staggered two year terms. Terms ended in June for Barbara Blake, Bill Grant, Ursula Kantor, Matthew Kidd, and Susan Koshkarian. All ran for reelection without competition and were reelected at the June 10th Annual Meeting and Election just before the unit game, the slate collectively approved by a majority vote (otherwise there would have been a paper ballot to vote yes or no for each individual candidate).

At the July 8th board meeting, the board elected its officers for the year. Bob Brobst has replaced Matthew Kidd as unit president and Matthew will replace Ursula Kantor as vice-president. Barbara Blake will continue on as treasurer. Gail Dunham became the new secretary at the August 12th board meeting.

Jeremy Fields and Ying Lin Gu (Flt A + B) won the Weiss Trophy this year with a 62.82% game. This wasn’t a fluke. In fact it was a slight underperformance! Halfway through 2018, they are averaging 62.84% over six games. This puts them way ahead of the usual favorites, Kent Hartman and Maritha Pottenger, who have averaged 56.99% over seven games, a slightly down year for them but well within the normal variation of their past year’s performance. 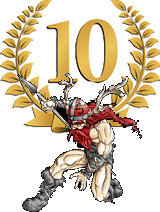 Jill and Stephen Seagren wrapped up their fourth year of teaching bridge at La Jolla High on behalf of the unit. They taught 94 student spanning three periods in the classrooms of host teachers Mr. Kinsel and Ms. Menders, over the normal three week duration. There was a tournament for the students during the last two days of the class. This is the tenth year of the program which was collectively taught during the first year, followed by three years with Randy Fadem as the lead teacher, and two more with Sandra Gagnon in that role.

Board member Lynne Anderson, a formal school principal, felt that the La Jolla High principal and the host teachers would be happy to receive a note a of appreciation for allowing us to hold the program for the last ten years. The unit had a plaque made and presented it to the school near the end of the teaching this year. We were able to arrange to have the La Jolla Light report on the occasion. (high resolution photo)

Ivar Stakgold passed away on May 29th at 92. Obituary. Though he only reached Emerald Life Master, his bridge achievements and a proper allowance for masterpoint inflation easily make him a Grand Life Master in all but the name. Ivar was also a well respected mathematician.

Tiger Technologies, our webhosting provider, has finally upgraded to their server software to allow support of HTTP2, a more efficient version of HTTP. This cuts the homepage load time by more than half. Big websites like Google and Facebook have supported HTTP2 for a couple of years now, matching the release for HTTP2 in client browsers such as Firefox, Chrome, Internet Explorer 11, Microsoft Edge, and Safari. Many small websites are still playing catch up.

The national board of directors canned the ACBL CEO, Bahar Gidwani, after only ten months of service. The ACBL made an official announcement on the Bridge Winners website on April 30th. No specific reasons were given. Nor could I obtain any information verbally from our district director David Lodge, or two other district directors whom I know. Meanwhile the online rumor mill churns—see ACBL Search Committee Up and Rolling and ACBL CEO: Post-Mortem.

Lacking facts, I cannot call this decision wrong. But it is certainly surprising. Mr. Gidwani seemed highly qualified on paper. He had acquired several hundred masterpoints, enough to understand our game and the people who play it. He came across as reasonable and intelligent in the e-mail correspondence I exchanged with him prior to this announcement. By all accounts, Mr. Gidwani had been successful in business and therefore was not beholden to ACBL politics, which is perhaps a clue to what unfolded.

What bothers me about this announcement is the utter lack of transparency. Four years after the ACBLscore+ debacle, the membership has not been given any accounting of what really happened. No one on the board or at headquarters took any responsibility and there is no indication that any lessons were learned. The board immediately hid behind a legal smokescreen as the rumors swirled. I feel that history is about to repeat itself.

In the corporate world, the company’s board protects the shareholders and shareholder value at the expense of the customers. Customers unhappy about a lack of transparency have little recourse but to take their dollars elsewhere. But we are different. We are members of an organization, effectively both customers and shareholders. The unit, district, and national boards serve us and are accountable to us.

We have little reason to erect legal shields. There is no real reason not to be transparent or put ourselves in situations where we can’t be transparent. We don’t even have any serious competitors and the barriers to entry relative to the benefits—financial, altruistic, reform, etc—are high. Moreover we enjoy a natural network effect with masterpoints; customers flock to eBay because it has the largest market, bridge players accumulate ACBL masterpoints because this market has the biggest bragging rights.

The handling of Mr. Gidwani’s dismissal and the ACBLscore+ debacle are discouraging to those of us in bridge administration. And every year our average membership age increases 0.44 years which makes it harder to find enough volunteers. We cannot afford unnecessary black clouds. I highly encourage you to contact David Lodge at 760-­328-­2004. Understand that he had not assumed office yet when Mr. Gidwani was hired. The issue is transparency.

2017 Mini-McKenney and Ace of Clubs results

Play in the Aztec Duplicate bridge tournament February 16-19 (flyer) and help heal an old division, dating back to 1932. Discussion between the ACBL and ABA means the ABA may be able to award ACBL masterpoints to participants in this tournament.

Continuing his emphasis on partnerships and statistics rather than individuals and what the late great Victor Mollo called monster points, unit president Matthew Kidd presented the fifth annual President’s awards at the January 28, 2018 unit game based on the unit game results for 2017.