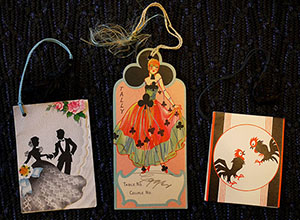 This year our holiday party was caught in the middle of the back to back scheduled Nationals in Phoenix and the very popular Palm Springs regional. We had 12 tables at the Soledad Club. If you didn’t take a brief break from the tournament trail, you missed out. Jill Seagren arranged for excellent catering from Cafe Athena. Lynne Anderson prepared our table decorations. Charlotte Blum provided additional decorations and prepared the punch with Ron Ignelzi.

President Matthew Kidd, assisted by Trish Lane (aka Vanna White the card picker), handed out our door prizes: a vintage Norman Rockwell bridge party pack, a box of Chuao chocolates, the book Winning Notrump Leads by David Bird and Taf Anthias, and a bottle of wine. We also had a big collection of vintage bridge tallies, many from the 1920s and 1930s for players who did not win a door prize. Three are pictured above.

John Strauch took a break from his very busy hiking schedule to become a Grand Life Master at the Phoenix Nationals in December 2013. In addition to the 10,000 masterpoint and various pigmentation requirements, the Grand Life Master title requires a national title. John had achieved this title with local Evan Bailey in the open pairs (now the Silodor Pairs) at the Spring 1995 Nationals, also in Phoenix. This time was a bit of a squeaker. After a week of play, John was still 1.4 MP short. John and his wife Bette decided to stay an extra half day and picked up 2.24 MP in the Friday morning side game.

Lynne Anderson joins the unit board

Lynne Anderson was appointed to the unit board at the November meeting to serve out a vacant 2013-2015 term. This brings the board back up to the full ten members mandated by our bylaws.

Lynne started playing bridge as a teenager in Minnesota in her parents’ game, followed by social bridge with sorority sisters, and then her husband. After a long hiatus she moved to San Diego and joined the ACBL in 2003.

Pssst… wannabe a hacker? Step right this way and learn all about masterpoint reports. Find out exactly what the ACBL knows about your playing habits and what data mining options are available to the ACBL. (I promise you won’t spend a month in a Russian airport waiting for a visa for a country you don’t want to live in.) Read more.

What is your lead at matchpoints? Would it be different at IMPs? See how well your choice(s) rank in the simulation and learn a bit about how to run your own simulations.

Which regular partnership is the strongest partnership in the La Jolla unit game? How statistically confident can we be about any determination?

Payoff Matrices for the Esplanade Club games and for the Eastlake Bridge Club games are now available for every session using data from the entire 2013 calendar year.

Bridge Results now has just over 2200 thumbnail photos of players, the little pictures that appear when you hold the mouse over the player’s name in the ACBLmerge style results. The thumbnails come from many sources including pictures that Matthew Kidd has taken over the years. Some of his pictures are worth presenting at higher resolution. Check out the new photo gallery.

The September 8th unit game was preceded by an awards ceremony, hosted by Charlotte Blum. Game attendance was low probably because the Irvine regional concluded on this Sunday. More awards will be handed out at the October 27th unit game. 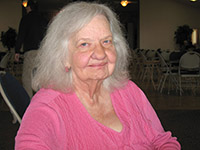 Billie Greene passed away on July 29th at 83. She had played bridge for more than 50 years, was a Gold Life Master, and a regular at our unit games. Biography and memories.

Hal Simon passed away on August 6 at his home in La Jolla. He was 85. Biography and memories.

Who says couples can’t play well together? The winners on June 23, 2013 were Ron and Mary Huffaker (Flt A), Avram and Susan Ninyo (Flt B), Morton and Eileen Heinrich (Flt C).

The 2013 unit board elections were held at the June 9th unit game. Randy Fadem and Ron Ignelzi were reelected. Charlotte Blum and Jill Seagren were elected. Charlotte had resigned in March but had continued to help the unit both in hospitality and in sending welcome letters to newcomers. It’s good to have her back full time. Jill brings a lot of executive experience. She has been vice-president of the La Jolla High PTA and is currently involved in many charitable activities, notably theater. We are still looking for one more board member to brings us up to ten members. Board terms run for two years and elections are staggered so that five board members are elected each year.

Marge Hughes and Janet Ansfield stepped down at the end of their terms. Marge played a major role in providing hospitality and has been our board secretary for the last two years. We will miss her well written and accurate minutes. She even knows shorthand—see if all you thumb twiddling texting kids can beat that! Janet has been in the La Jolla area for about eighteen years and has spent around fifteen of those on the board. I can not fully enumerate her achievements because many of them predate my arrival but they include taking on the primary responsibility for hospitality shopping, often helping setup the hospitality, organizing the unit holiday party venue and catering many times, and being chair or co-chair of several sectionals.

Rex and Sheila Latus won the Weiss Trophy which is always contested at our annual meeting and election.

The board chose its officers for the next fiscal year at the July board meeting. Matthew Kidd and Randy Fadem were unanimously reelected as president and vice president respectively. Jill Seagren is our new secretary. We had tied vote for treasurer with one board member absent. Chuck continued as treasurer until the August board meeting when the board voted again and Joyce Bailey became our new treasurer.

The $5 promotional rate for the 0-750 game ended April 28, 2013. However, at the April meeting the unit board established a new policy to help continue promoting the 0-750 game. If you qualify for the 0-750 game but end up playing in the open game and paying for it (as opposed to using a free play) because there are not enough players for a separate 0-750 game, you will receive a free play for a future unit game, good for two months from the date of issue.

We have also added an “Ask the Expert” session at the end of the game. Stick around until the open game finishes for a 10-15 minutes of Q&A. So far Bill Grant, Chuck Wilson, Barbara Norman, Suzanne Lebendig, Roger Doughman, and Maritha Pottenger have volunteered to answer questions.

Want to know more about the unit budget? Read Fiscal Commentary 2011-2012, which details what is involved in our budgeting and why FY 2011-2012 differed significantly from the previous year.

The board would like to thank David Oakley for our most recent financial audit, which he performed at no cost to the unit.

2012 Mini-McKenney and Ace of Clubs results