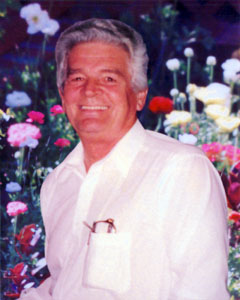 Robleigh Lindvall passed away December 14th after a long illness. He served on the board for several years and often did hospitality for our big parties.

There will be a “Celebration of Life” on January 24, 2010 at 11:30 a.m. preceding the unit game. A light lunch will be served. All attendees are invited to share their own special moments with Robleigh.

Above the bright, happy colors of a bouquet of spring flowers was most likely the bright smile on Robleigh’s face. He loved sharing his garden production with our unit game players.

He loved to cook and so a unit potluck would turn into a feast with the addition of a delicious plate (or 2 or 3) from his kitchen.

He loved to play bridge and so his congenial smile was there at our games often as he sat at the table with his lovely wife, with good partner, Jane Wayne, or with any of his other partners. He loved to win as well as anyone there. He could do so with a gentleman’s grace.

He loved to tell and to listen to a good story or joke and so his presence meant laughter and warmth.

Our unit was very fortunate to have him with us because he loved to help. And help he did in answering any cry for assistance within his time and ability even when he was failing in strength and health.

Above all there was his great love for his wife and daughters. Dorinda, who values his love, and his daughters, who altogether were “family”.

All of these things Robleigh loved and he was loved in turn by his wife, children, friends, just about anyone who knew him. He walked this earth as a “good man”.

Good-bye, dear Robleigh. Thank you for opening the joy in your heart to us.

[...] I also learned a little bit about Rob and his peculiar nature. As you all know Rob liked to be the life of the party. The bridge club held a Halloween party — and I think this was in Mission Valley — I don’t remember the name of the club. And as you all know if you have attended Halloween parties there are three kinds of people: one set of people come in with no costumes, another set come in with maybe a token piece of costume on - maybe a hat or fake mustache - and then there are people who come fully dressed to the hilt. This was Rob.

Rob had a lot of fun at every table he sat at that evening. Now this was Robleigh, the Robleigh we are knew. He just liked to be the life of the party and he didn’t mind the attention he got.

Since we are bridge players I have a few funny little stories about bridge. Back in the late seventies and early eighties, we attended a lot of the regionals and nationals with the Lindvalls and we were on a lot of occasions their partners in Swiss Teams. On this one particular occasion we were playing Swiss teams in the morning session and we had completed three rounds — kinda mediocre, nothing to write home about — and we are sitting for our fourth round against Eddie Kantar and I could see that Rob was a bit nervous because he was always in awe of bridge professionals. So Rob was the dealer and he opens the bidding with one diamond, Mr. Kantar on my right passes, and I had a very nice hand, maybe 18 hcp with one ace and a club void, and I bid a major, and his [Kantar’s] client preempts at the four level. Rob passes, Kantar passes, and it comes back around to me, and I thought “aw shoot” I’ll just ask for aces. You know we had a very simple card; there was nothing complex about our card and we played Standard American, so every hand was an invention. So I bid four no trump, the client passes, and Rob is nervous over there; he is staring at Eddie Kantar and instead of bidding five hearts he bids six hearts. Now Kantar passes in a flash; I think he knew what was going on. So instead of six diamonds we end at seven diamonds which made because the outstanding ace was in my void suit. We had no way of knowing that of course when I bid seven diamonds. So we go back to Dorinda and Bee’s table and they’re looking at us and say, “boy oh boy we’re going to lose this round unless you bid six diamonds.” I said we didn’t bid six diamonds; we bid seven! So we won that round with Eddie Kantar.

Another humorous story is a time when I believe we were in the Pasadena regional — the Pasadena regional used to be very big if you remember back in those days — and we were in the hotel on one of the upper floors and typical of all bridge players we got ready at the last moment. So we run to the elevators, we get and there are maybe three or four people in there. Often when the elevator door opens and you see there are some people in there and you don’t want to get too cozy with them you wait for the next one. Well they were all bridge players and they realized they were late to the game so everyone flooded into the elevator. Pretty soon we were elbow to elbow, chin to chin, could barely breathe in there, with all bridge players. The last guy to step on was Barry Crane. So we are all quiet there together jammed on the elevator, nobody saying a word, no one breathing because we are all so close to one another, and all the sudden from the back of the elevator comes this little leprechaun voice. Rob is pushed way at the back and Rob says, “Ladies and gentlemen you’re probably wondering why we are gathered here together for this sermon.” Then he started in on a sermon. And everyone looks around like where the heck in that voice coming from. I think he had a wonderful day after that.

Folks, we had many other stories to tell but I’ve forgotten most of them and we are going to start playing bridge here soon. But in summary, I’d like to say that I personally will miss Rob, as will his wife and family, and I know all of you personally who have played against him know that he was a total gentleman at the table. I don’t remember him ever raising his voice at anybody and he would be willing to give his shirt off his back. I know that you all have that image of Rob and I hope that is something we can keep in the future. (applause)

It’s hard to follow those stories. I just want to say as a person who been a member of the unit and on the unit board for many years, off and on, Rob was always there to help. I mean I remember many times running a tournament and Sunday night when people are all gone, Rob would be there helping, putting tables away or cleaning up things. [He] was just the most helpful person I knew in those days. I really had a great opinion of him because of that and other things. Thank you.

I think you all know me, Joel Hoersch, and I guess I sort of want to make a sort of confession. I’ve always been a little bit jealous of Rob. I’ll tell you why. It’s because I’ve been in bridge for forty-odd years and one of the things I did besides play is [work in] administration. I always considered myself sort of a humorist; I put together shows and skits and things and try to entertain bridge players throughout the years and I was just never able to achieve, no matter how many hours and the number [of things?], ... I was never able to do what Rob could do in just a few minutes [of] offhand comments to entertain people. He was one of the wittiest men I ever met and I’m really going to miss that. We are working on a show now, Guys and Dolls, for the [San Diego] regional in April, and I think I’ve got someone up there who is going to be enjoying it from above and that’s a guy who could have been any character in the show. He was that good. Thanks.

E-mail the Webmaster if you would like to add memories or pictures to this page or correct the audio transcripts.