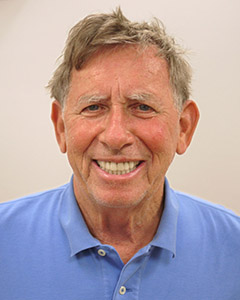 John Devine helped the La Jolla unit with the high school bridge teaching at La Jolla High in 2012. His daughter Juliana was a student and this was their first experience playing bridge together.

John and his fiancée Jan Gallager were a regular partnership in the Monday afternoon game at the Soledad Club during 2011 and 2012 and John was an occasional visitor to the Thursday evening game.

The “meanest” round of bridge I ever played was against John and his partner Sara Tyler on December 17, 2009. Everyone was perfectly civil; it was just the cards. On the first board my partner Bob Walters opened an 18 hcp hand 1♣, I passed a two count, and partner was promptly set for -200 by John and Sara, who had nothing better than three diamonds their way. Bob tried again on the next board, preempting a vulnerable 2♦ on ♠xx ♥xxx ♦QJ9732 ♣x, and collected -400 undoubled. This time the opponents had a vulnerable no-trump game but with only 24 hcp and flat shape none of the field found it. We took our revenge on the third board. Partner made a balancing takeout of 1♥ which I converted with ♥Q8654. We picked up +800 with nothing better than a no-trump partial our way. Sometimes you just have to defend!

John Devine passed away on February 17, 2014 after a long, hard-fought battle with leukemia at the age of 73. John was born in Brooklyn, NY son of William John (Jack) Devine Sr. and Rita Kiernan Devine. John attended St. Anselm’s Priory (now Abbey) High School in Washington, D.C. and Catholic University and the University of Maryland. John served in the Army from 1963-1965. John joined Toys R Us in 1966 and helped grow the company from four stores to over 200 and from $10 million to over $1 billion in sales and named their mascot, Geoffrey the Giraffe. He opened their second market in Los Angeles in 1968. In 1972, he was promoted to Exec. V.P. and COO and started their international division in 1982. He retired in 1983 to the Dominican Republic.

John was a world class bridge player including being three time National Bridge Champion. He began playing bridge with his brother Brian as teenagers by playing “honeymoon bridge.” They later ventured out to tournaments and were known as “The Smith Bros.”, because of their heavy beards—Jade Barrett recalls playing against them. John owned a bridge club in Tenafly, NJ in the 1980s. John won the Jacoby Open Swiss in 1985 playing with Roger Bates, John Mohan, and Alan Sontag. The same team placed second in the Mitchell BAM in 1985. They also won the Jacoby Open Swiss again in 1987 with the additional of Eddie Kantar. John was “only” a Silver Life Master but most of his masterpoints were earned before the triple point charity game madness. He was probably the equivalent of a Gold Life Master or better today.

John was also an outstanding golfer including being a three time Club Champion at the Knickerbocker CC in New Jersey and Sr. Club Champion and 2-time winner of the Lomas Cup at Lomas Santa Fe CC in Solana Beach.

John stopped playing bridge to raise his young family, but started to play again in 2010. He met his fiancée, Jan Gallagher, at a club game in Escondido in March of 2011. They continued to play bridge and golf together.

John is survived by his beloved fiancée, Jan Gallagher, his two sons, Jack and Liam, and his two daughters, Tyler and Juliana. He has two brothers, Brian and Terry and two sisters Rita Marie Grace and Ann Burns. He also has two grandsons, Walker, Miles, and Dominic.