In brief, the unit tends to break even every fiscal year. The unit games basically break even and the profits from the Memorial weekend sectional pay for the significantly subsidized holiday party, a long running unit tradition. Historically, the January sectional, when conducted, also breaks even. The last fact explains why the unit sometimes fails to run a January sectional. Personally, I feel a break even tournament is okay as long as players have a generally positive experience. Very few people are in bridge administration for the money! But a counter argument to holding the January sectional is that the the southern California tournament schedule is already very crowded and tournament fatigue may be setting in.

How do your card fees get spent? Since some expenses are fixed (e.g. rent), some scale with the number of tables (e.g. sanction fees), and some depend on other factors (e.g. hospitality or the rank of the director), the actual numbers vary from game to game. Over the last 12 months, we have averaged 19.98 tables / game at unit games (sectionals excluded) as shown in the plot at the bottom of the page. Let’s call it 20. The following chart, based on 20 tables and ranked from most to least expensive, gives a fairly accurate breakdown.

Moreover, this chart does not include the cost of restocking club supplies (i.e. pickup slips, cards, bidding boxes / bidding cards, inkjet printer ribbons, etc), and minor expenses associated with high school teaching effort. Furthermore, the board recently voted to approve two insurance policies, totaling ~$1200 / year, an expense of ~$0.65 / player-session. And it appears that the cost of printing hand records will soon roughly double.

Sanction fees are not shown because due to a process I’ve never quite understood, the ACBL periodically kicks a little money back to each unit and that more or less cancels out the sanction fee.

The unit maintains two accounts. The first is a working account with a few thousand dollars for regular expenses. The second contains around $25,000, which I understand was donated to the unit many years ago. There is no unit policy on what to do with the donated money. The cash reserve would certainly be helpful if we ever had to relocate the game. Personally I think spending a little of it on educational purposes would be good for the game. Since the ACBL picks up a lot of educational expenses already, the unit expenditures need not be large. 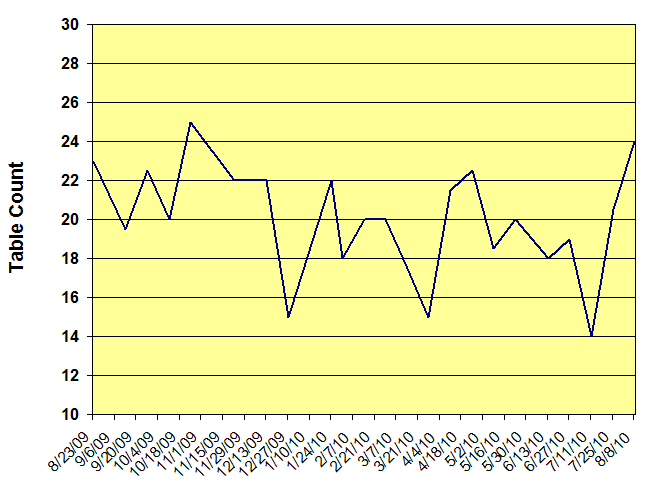