Despite the improved fiscal picture, we have significant challenges ahead due to declining table count in the open game. The second section discusses the break even table count under various scenarios and includes an update of Budgeting 101 from 2010. This is followed by a discussion of variable income and expenses in part to serve as an institutional memory. Finally, a plot of table counts is presented for the last 18 months together with thoughts about the future.

As a cost saving measure, the board suspended free plays for board members, effective August 28, 2011. Because not every board member is at every game and the board is not always at its full strength of ten members, the savings works out to about 7 free plays per event for a total savings of 7 players × $8 per player × 21 events or about $1200. In July 2012, the board passed a motion to resume free plays for board members if the unit games average at least 20 tables over any four month period. This has not occurred yet.

Insurance changes were significant. Our lease with the Soledad Club requires us to purchase liability insurance. The first liability insurance policy was hastily purchased prior to a review by the board. In the following year, we switched insurance providers to the same one used by the San Diego unit, saving $400. The annual insurance payment came late in the fiscal year and due to a snafu, the FY 2011-2012 payment didn't get paid until we were somewhat into FY 2012-2013. This was unintentional but has the effect of a one time savings of $400. Finally, the board had purchased an insurance policy for the board directors which was dropped for the 2011-2012 fiscal year.

The unit has had a long standing policy of subsidizing the annual holiday party. Fees for the December 2011 Holiday Party were raised $5 per player. The fee structure was also revised. Previously the unit charged unit members less than non-unit members. The fee differential was retained but reworked so that the lower fee was only given to players who played in six or more unit games during the calendar year. The new policy is similar to how the San Diego unit prices their holiday party.

The board set out to reduce hospitality costs. Janet Ansfield, who has done most of the hospitality shopping the last year and half, deserves credit for containing this expense.

Randy Fadem, acting for the board, negotiated with the janitorial service to reduce the daily fee from $75 to $60.

Mike Weber directed his last game for us on August 28, 2011, barely into FY 2011-2012, before retiring in Oregon. Mike was a fairly high ranking ACBL director whom we paid $6 per table. Our new director, and his substitutes, receive $5 per table with a guaranteed minimum of $75 (15 tables).

Interest rates fell to nearly zero after the U.S. recession that started in 2008 and have remained very low. In FY 2011-2012, the unit invested a portion of its cash reserves in conservative bond funds.

Careful readers will notice that the $6,300 total is somewhat lower than the $7,200 difference in the turnaround between losing $4,500 one year and profiting $2,700 the following year. This difference is probably due to round off, a possible underestimation of the saving from dropping free plays for board members, and small changes not included above. It should be understood that this document is meant to be a technical overview rather than a financial audit. In recent times, David Oakley kindly conducted a detailed financial audit at no expense to the unit.

From a financial planning perspective, it is useful to view the budget as having four components:

In the next section, I’ll consider the first three categories before taking up the remainder in the final section.

What table count is currently required to break even?

Fixed expenses per unit game are shown below:

When the table count is low, the movement may only require one set of boards but we must have two ready. The caddy is discussed further below.

The expenses that scale with the number of players is shown below. Technically some of these expenses are priced per table, but it is trivial to convert them to expense per player.

The following annual expenses and credits are predictable and therefore suitable for amortization over all unit games.

The unit holds two games per month, nominally 24 games per year. We also host the occasional fifth Sunday (traded off with the San Diego Unit). However, we sometimes cancel our regular second or fourth Sunday game due to a conflict with the San Diego regional, the Coronado sectional, or Christmas. So I'll use 24 games for the amortization calculation. $529.25 ⁄ 24 = $22.05 yields the Amortization Credit shown above.

Note: Some players have a slightly different reimbursement rate, e.g. $3.52. I think these are players who renewed for multiple years at once and received a small discount for doing so.

Currently our card fees are $8 per player. Therefore, the break even table count is found by solving this equation:

How the break even table count changes for various scenarios

Ideally a caddy does more than set out bidding boxes and collect pickup slips. A good caddy can make coffee at the start, help setup hospitality, and help cleanup at the end. Patricia McGinn fit the bill perfectly until her recent serious illness. In principle not using a caddy reduces the break even player count by 9 players, or slightly more 2 tables. In practice, directors often expect a bit more reimbursement such that the savings is more like 1½ tables. Moreover, board members appreciate a having a caddy especially now that free plays have been discontinued.

Significantly variable expenses and revenue include.

The most highly variable item is the profit or loss from our Memorial Weekend sectional. The sectional is almost always profitable but the actual amount varies widely. Attendance, director expenses, and hospitality, are all big contributors to the variability. A single out of town director can cost as much as $500 extra for lodging and transportation. We always seek to use local directors whenever possible and ask the ACBL that the director in charge (DIC) be local.

Currently, the unit is trying harder to meet the needs of non life master (NLM) players by holding NLM sectionals. The first such event in many years, a one day sectional concurrent with our regular Sunday unit game, lost $200. We hope to break even next time but it is difficult to predict. Just after our event, the national board directors voted to disallow sectionals shorter than two days. The board will consider Sat-Sun or Sun-Mon NLM sectionals; however rent will be higher days other than our regular Sunday game.

In principle the holiday party expenses and revenue are predictable. In practice they can vary a few hundred dollars due to late cancellations, hospitality extras, and how many players qualify for a discounted fee.

Most units present awards to rank advancers. It may be as simple as a certificate for ranks below life master but is often something significantly nicer for high ranks. The expenses can easily run several hundred dollars per year.

The unit issues some free plays to rank advancers and new members to the unit. The redemption period is usually limited and in some cases may be in the form of “one for one”, i.e. play in a unit game to receive a free play in a subsequent game. Redemption rates vary but the total cost is probably not more than $200 per year.

Postage is the largest marketing expenses. Although the unit has a web site and we have e-mail address for many members, we can not rely on those communication methods in all cases. Not all ACBL members use e-mail, some do not share their e-mail address with the unit (as controlled by an ACBL privacy setting), some are discouraged by e-mail spam, or suffer other computer problems. Currently, the unit mails about five letters per month to new unit members at an expense of $40 per year. The recent marketing campaign to promote our new 0-750 game cost about $150 to mail nearly 300 letters.

The unit has taught bridge to seniors at La Jolla High School at the end of their academic year for the last four years. The ACBL Education Department covers almost all material costs. However, we have provided bridge books to tournament winners and/or promising players at an expense of less than $100 per year. 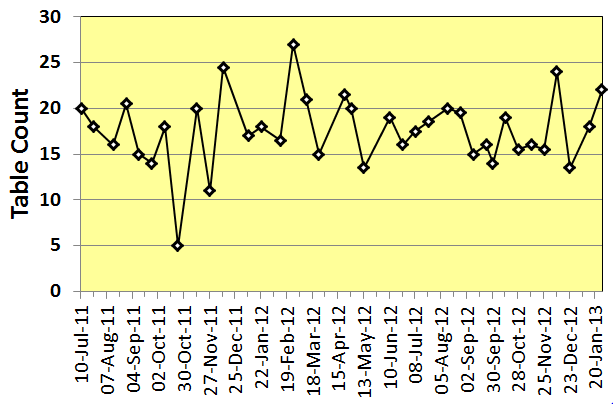 Note: The five table game was a snafu. Normally the unit does not hold a game during the Coronado Chula-Vista sectional but the date was different than usual in 2011 and by time the board noticed, it was too late to cancel the date with the Soledad Club.

I think we have a great game at a great facility and I’m proud to be part of tradition of several decades. I knew Evan Bailey who won our unit’s Weiss trophy the year I was born and whose merge program inspired ACBLmerge. Several of the winners from my childhood are still playing in our games today. This is a real sense of continuity.

But we always need to be looking forward. It is important to be drawing advancing players into our open game. I like to point out that not only is San Diego a great place to learn bridge, it is a great place to learn to play it well. I hope everyone can help with this process. You can play an active role by suggesting to advancing players that the time has come to take on a more challenging game even if that means abandoning the false prophet of masterpoints for a while, an investment that will pay back in both skill enhancement and masterpoints. Or you can simply strive to keep the game friendly. As with the restaurant business, a single bad experience outweighs many good experiences, so do all you can to avoid creating unfriendly or quarrelsome situations, even if you are inherently more competitive than friendly. The newer players have keen ears for bickering and quarrelling in the open room and it keeps them away.

Along these lines, the unit will be reviewing how it aligns with the ACBL’s Zero Tolerance policy. In its most literal interpretation, this policy strikes me as too politically correct but I think it well intended and aspects of it should be adopted by the unit.

Meanwhile, keep your fingers crossed for the success of the new 0-750 game. Please introduce yourself to these players and be open to answering their questions. Despite the many great bridge books, software programs, hand records, and online results available today, there is often nothing better than asking a strong player what they would have done while a situation is fresh in your mind. Please help.