Last week during the tournament at the end of the La Jolla High bridge teaching, one of the students was reluctant to sell out to 3♣. Her instinct was good but unfortunately she chose to balance in no trump and had the misfortune of playing against a pair that had read up on the penalty double. Down five and -1100 was a 15 IMP swing. She took it in stride but to console her a bit more I told her the story of my friend “Down Ten” John. 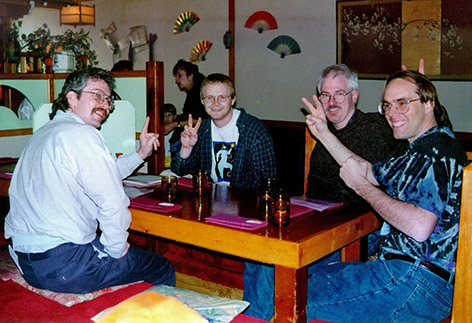 In the mid-nineties when I lived in Salt Lake City, I had convinced three rubber bridge playing friends from Big Ed's to take up duplicate. The average age of our team was under thirty at a time when the average age of bridge players was already fifty five or sixty. It was the first time I had a bridge team that I felt was really my team. It felt good.

One day we playing teams and partner and I were pitted against Mike Dalton and Mike Berggren. Mike Dalton is now well on his way to Grand Life Master but even then he was a strong player, hardened by the southern California bridge scene before arriving in Salt Lake to spice up our lives. Mike Berggren was a strong local player. Their teammates were decent club players.

We were the clear underdogs but things seemed to be going well. Early on we bid slam on the auction 1N 2♥ (transfer); 2♠ 4♣ (promising 5+ clubs); 6♣. I cashed a couple of side suit winners and soon claimed the rest on a high cross ruff. I was pretty sure our counterparts would stop in the spade game. Five more boards seemed very likely to be flat. On the last hand at unfavorable vulnerability, 3♦ was passed around to my 5=3=3=2 13 HCP hand with ♦Axx in the preemptor’s suit. With some trepidation, I balanced with 3♠ which partner corrected to 4♥, a contract that made on the nose. This had to be a push or good. We had done it. We had finally beaten the Dalton team.

The comparison began exactly as I had predicted: a game swing from the slam and five pushes. Victory was ours. Until John read out the -2600. “What happened?!! And how many down is that?” Charles, holding the ♦JT9xxxx and two or three more points on the last hand, didn't have the guts to preempt 3♦ even at favorable vulnerability. His LHO opened 1♣ and John threw in a truly horrible four card 1♠ overcall on something like ♠KTxx. Responder had my five spades and might have passed and hoped for a reopening double but decided to try the safe 3N given the unfavorable vulnerability. Now Charles began to regret not preempting and came in with a 4♦ bid which was passed back to John. Theoretically 4♦ could be diamond preempt that didn't preempt initially because of a four card heart suit but John took it as a splinter, perhaps envisioning a bizarre hand like ♠765432 ♥Ax ♦– ♣KQJxx, and beat a hasty retreat to 4♠. Charles tried again with 5♦. John cue bid 6♣ and when all was said and done John was in 6♠ doubled on a bad 4-2 trump fit. Down ten.

A couple of years later, eight of us drove to regional in Boise. I wound up on the weak team, though I give my teammates, who had almost no duplicate experience, credit for surviving four sessions without incident. John was on the stronger team and in his usual fine form. This was back in the days before everyone was afraid to play against anyone with ten more masterpoints than themselves. Either there wasn't a limited Swiss game or we chose not to play in it; if the latter we weren't alone.

Flimflammery can work great against C teams; in fact it's a triple shot: either you make the contract, perhaps on poor defense, steal the contract undoubled, or push the opponents too high (and maybe even double them). After five rounds John had flimflammed his team to a meeting with Grant Baze and friends. Many teams have lost to Grant Baze but few as big as John and few so deservedly. They figured John out after the first or second board and it was a bloodbath of red cards thereafter. I'm sure they lost by more than 50 IMPs in seven boards.

John was a good player though when he cut out the poker style crap. Once when we were playing together, perhaps in Reno, he fooled Eddie Kantar into giving up a precious overtrick on defense at pairs. Eddie kind of looked him over at the end of the hand and joked that he would be watching out for John next time.