Not sure what IMP Pairs is? Review the explanation from last year.

Jean Molnar was the Director-in-Charge. She was assisted by Arleen Harvey, Brandon Sheumaker (Saturday only) and Paul Darin (Saturday only). They all did a very professional job.

This was a fairly big La Jolla Unit sectional, though smaller than last year’s fantastic 287 table three day May Sectional and the four day 283½ table May 2009 sectional. Financial recap.

Wirt Gilliam, the owner of Adventures in Bridge, was a good host in many ways that went beyond his contractual obligations with the unit.

Neal Chua helped me pack all the rental chairs in my car. 50 folding chairs in a hatchback!

The following 24 players receive the iron butt award for playing in all six sessions. Collectively they represent 14% of the total table count.

If you would like to see your picture appear when the mouse cursor is held over your name in the results as in the screenshot below, e-mail your picture and ACBL player number to me at webmaster

lajollabridge.com. Note: cut-and-paste may not work for this e-mail address due to spam prevention measures.

The field strength numbers are computed as the arithmetic and geometric means respectively of the masterpoint holdings for all ACBL members in a field.

I added 11 new faces at this tournament and updated 3 existing faces. Your new or updated picture will also appear on Bridge Results.

Did you know your recap sheet is just a click away? Click on your pair number and wait a couple of seconds for the popup window to appear. Want to copy hands more conveniently? Click on the C button below the double dummy results on a hand to bring up the cut-and-paste aid. 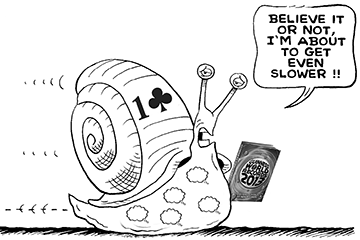 ) posted at each location where directors collected entries and at the hospitality location.

Penalties are the only thing that affects the behavior of slow players. Warnings, cajoling, shaming, badgering, etc have all been tried and proven ineffective. Just ask any director. The standard penalty for the first offense is 1/8 of a board, roughly a decrease of 0.5% in the overall session score, doubling for each subsequent penalty in the session. I think starting at 1/4 of a board would be an improvement.

Slow play penalties are not intended to penalize players who face the occasional genuinely difficult bidding or play situation but rather those pairs who are slow nearly every round. You know the type. The uncontested auction begins 1♣ 1♠ and suddenly opener goes into the tank. No auction ever seems routine with such pairs even though they are a well established partnership where each player has a couple of thousand masterpoints. Or as a defender you quickly realize declarer’s only reasonably line of play is to try for a 3-3 break in one suit with a finesse in another as a fallback option. But by time declarer reaches this conclusion, the hand has taken ten minutes to play. Regarding slow players, Howard Bigot-Johnson (and I) ask, “What can they be thinking about?”

Slow players may think their behavior doesn’t cause much harm because most players, except the poor pair following them, are only delayed and annoyed during one round. But as with similar behavior such as pollution, squeegee men, and abuse of political office where the harm is diffused over many people, we must still consider the aggregate impact of the behavior. The slow players are greedy, thieves of time, the opponent’s time, in a timed game where each partnership is entitled to half the time on the round on average. And the impact extends beyond fairness. Here is long time Vancouver regional tournament manager Bruce McIntyre quoted in Bigot-Johnson’s article Slow Bridge Players: The Biggest Irritant of All:

“The biggest irritant in duplicate bridge, claimed a survey not too long ago, is not table rudeness, or complicated systems, or even anything to do with smoking…it is slow play. Many experienced local players who used to play frequently are seldom seen at clubs these days. Is it because they play rubber at home? Because they’ve lost interest? Because they feel no need to beat inferiors? Because they’ve lost touch with the latest conventions? No. It is because they haven’t the patience to play club bridge anymore, because it’s too damn slow. As a result, many club games are getting smaller. Once you lose the top end of your player base, the remaining members don’t attend with anywhere near the frequency of the bridge-crazy addicts, and attendance goes slowly down. You can point to a lot of reasons why attendance is off, but the number-one turn off is following a pair who are slow every round, and (if you are a sitting pair) waiting for the boards as always from the slowcoaches next door to be completed and handed over!”

Better to lose a few incorrigible slow players than the game itself. 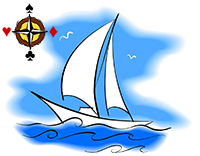 Most of my landscape photos from the slideshow at the tournament can also be found on my Panoramio account where they eventually make their way into Google Earth and Google Maps (view big 1200 × 900 slideshow or smaller 800 × 600 slideshow). I showed photos taken since last year’s May sectional. Many pictures are from Utah, including four glorious days hiking in Escalante in the fall during the government shutdown. Many others are from local hikes taken with John Strauch and the folks that he has been hiking with for years, decades in some cases.

Table tallying notes: Monday afternoon had two half tables. I rounded the 749er Pairs down and Open IMP Pairs up.