*Revised May 30th. The Anderson-Agelidis vs. Englekirk-Tatum result on board 17 was corrected to +510 from the original +140. This slightly changes the masterpoint winners.

Arleen Harvey was the Director-in-Charge. She was assisted by Scott Campbell, Brandon Sheumaker (Saturday only) and Marc Matz (Saturday and Monday). They all did a very professional job.

This was the largest La Jolla Unit sectional in recent memory, beating the May 2009 sectional by 3½ tables and doing so in only three days as opposed to the four days of that sectional. Financial recap. 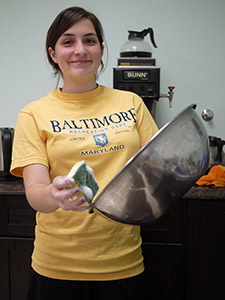 Many people contributed to our fantastic sectional. But above all I want to give a big round of thanks to Allison Ogul, our regular unit caddy. She has had a few months at our unit games to get used to the ways and moods of bridge players. But the Saturday lunch was the first time she has seen more than two hundred hungry, obsessed, sometimes impatient and irritated players line up lunch. It’s a bit scary—I've been there before. Fortunately, Allison had a calm, cool, and collected board member in Charlotte Blum to guide her through this process and additional cleanup help from Jill Seagren. Also, throughout the tournament Allison made sure fresh coffee was always available.

Charlotte brought food for Saturday, as did unit members Freda Anderson and Jill Seagren. Board members Joyce Bailey, Cass Donovan, Marge Hughes took care of the Monday lunch preparation and each brought homemade baked items. Janet Ansfield contributed on both days and shopped for snacks. Matthew Kidd brought the donuts on Saturday morning and ice cream and strawberries for the Sunday afternoon dessert. Randy Fadem brought melons and cole slaw for Sunday. Bill Grant picked up the pizzas on Sunday and the bagels for Monday morning. The ever helpful Ron and Mary Huffaker handled much of the Saturday and Sunday morning preparation and set us straight about how to make coffee and other practical details of operating at AIB. Jo Boyer assisted on Monday morning. The unit gave all three of them free plays for their contributions.

Wirt Gilliam, the owner of Adventures in Bridge, was a good host in many ways that went beyond his contractual obligations with the unit.

Cass Donovan and Ron Ignelzi handled the partnership desk. Brian Cushman, a new caddy, worked with Allison on Sunday for the team games. Nik Alic and Richard Stein helped tear down the tables and chairs in the extra space.

The following 31 players receive the iron butt award for playing in all six sessions. Collectively they represent 16% of the total table count.

What are IMP Pairs?

The Monday afternoon open pair game was an IMP pair game rather than a regular matchpoint pair game. This was my decision though my co-chair Bill Grant agreed and of course the ACBL signed off on it. I wanted to add a little spice to our steady diet of meat and potatoes. Some people complained that they didn’t realize it was IMP pairs. I only feel slightly bad about this. If you have 2000+ masterpoints and can count out every hand with ease, you should be paying attention to tournament flyers and have familiarity with less common event formats. This said, if we do it again, I will try to have the directors announce that it is IMP pairs before the game.

A couple of months before the tournament, I had intended to provide an explanation of IMP pairs on the website but I forgot amidst the other tournament preparations. Better late than never.

IMP Pairs is a pairs event that is scored like a team event. As such the strategy is much like team strategy. Who are your opponents? The other pairs sitting in your direction. Your result is compared to all other results in the same direction, and the difference is converted to IMPs using the standard IMPs table. For example, consider the lucky fool in 3N making 4 on board 3. His partnership’s 430 gains nothing from the three N-S pairs scoring 420 since a difference of 10 is nothing in team scoring. From the N-S pairs scoring 170, 140, and 100, his partnership gains 6, 7, and 8 IMPs respectively. From three N-S pairs with a -50 score, his partnership gains 10 IMPs each (430 − −50 = 480 ⇒ 10 IMPs). From the final eight pairs, his partnership gains 11 IMPs each. Adding it all up gives 6 + 7 + 8 + 3×10 + 8×11 = 139 IMPs. Your final score is this per board IMP score summed across all the boards.

Though it doesn’t matter for ranking purposes, total IMPs is a meaningless number because it isn't scaled down by the number of boards and the number of opponents that one is compared to. It is much more meaningful to consider the average number of IMPs per board that one is gaining or losing against the average opponent. For the Monday afternoon event, everyone played 27 boards and each board was played 18 times, i.e. there are 17 opponents to compare each result to. So the total IMP score should be divided by 27 × 17. The lucky fool’s partnership was losing 526.00 / (27 × 17) = 1.15 IMPs / board to the average opponent. This a meaningful number, just as a 48% result in a regular pairs game is meaningful. The first place winners were 2.45 IMPs / board better than the average opponent.

Now and then one hears complaints that matchpoints is a bastardization of bridge. All that fuss over whether no trump will take as many tricks as the major suit game or perhaps do one trick worse, or whether +110 will edge out +100 and so forth. Arguably matchpoint scoring is a historical accident. Without a computer, matchpoint scoring is much easier than IMP Pair scoring. With a computer both forms of scoring are trivial. If you like teams, you should like IMP Pairs.

If you would like to see your picture appear when the mouse cursor is held over your name in the results as in the screenshot below, e-mail your picture and ACBL player number to me at webmaster

lajollabridge.com. Note: cut-and-paste may not work for this e-mail address due to spam prevention measures.

The field strength numbers are computed as the arithmetic and geometric means respectively of the masterpoint holdings for all ACBL members in a field.

I added 17 new faces at this tournament and updated 4 existing faces. Your new or updated picture will also appear on Bridge Results.

Did you know your recap sheet is just a click away? Click on your pair number and wait a couple of seconds for the popup window to appear. Want to copy hands more conveniently? Click on the C button below the double dummy results on a hand to bring up the cut-and-paste aid.

Adventures in Bridge vs. the Soledad Club

Most of the La Jolla unit sectionals have been held at the Soledad Club. This year, as in 2009, we held the sectional at Adventures in Bridge. I have played at the Soledad Club on Thursday nights for years and also in our unit games. I can’t imagine a more wonderful place to hold our unit games. The building itself, the high ceiling, the fantastic natural light, and the wonderful views easily make this the best facility I have played bridge at.

But the Soledad Club is a challenging place to hold a sectional. For starters the capacity is limited to 38 tables even when the downstairs area is in use. This means the tournament manager must shoot for a narrow attendance target, high enough to make a profit but low enough to not exceed capacity on the largest day, typically Saturday. In the case of overflow, one might fit four more tables in the playing space, but only at some discomfort to the players. Beyond that, tables would have to go onto the balcony or even the parking lot. By contrast, the new Adventures in Bridge location has 55 tables and the owner has the option to rent extra space on short notice at a modest price one day at a time. These extra rooms are considerably nicer than garage space previously used for overflow at the old Adventures in Bridge location on Mission Gorge Pl.

Parking is a minor issue at a large Soledad sectional, manageable but awkward. The new Adventures in Bridge location has plenty of parking. The Soledad kitchen is a bottleneck at a big sectional. The kitchen at the old Adventures in Bridge had similar problems but the situation is much improved at the new location.

Adventures in Bridge is a large bridge club and as such can provide convenient services at a reasonable cost. For example, the unit paid 50 cents / table for food and bridge supplies such as plates, bowls, cups, plastic utensils, entry forms, and the like. This saves a lot of work for the tournament manager. Board duplication can be performed on site if a surge necessitates an extra set. A number of extra tables and chairs are also available on site.

The Soledad Club has been nicely maintained and upgraded during the last few years. Improvements include a new floor, new windows, and a new refrigerator. But from a tournament manager’s perspective it is mostly unchanged. At the same time, Adventures in Bridge solved several of its awkward problems during its relocation less than half a mile, enhancing its desirably as a tournament location.

There is a sentiment on the board, which I share to some extent, that our unit’s identity is tied up with the Soledad Club. We will probably go back and forth for sectionals and will certainly hold smaller sectionals, e.g. NLM sectionals, at the Soledad Club. There is also concern that La Jolla players will not leave the cove to play in a sectional at Adventures in Bridge. This year that concern proved unfounded. Although in absolute terms more players from the San Diego unit attended this sectional than from the La Jolla unit, the San Diego unit has more than two and half times our membership. Relative to total membership, more La Jolla unit players attended our sectional. The strong sectional turnout from our members is also reflected in the 6½ table turnout at the Monday Afternoon Soledad Club game, down from the 16-20 tables that game normally has.

Two pieces of pizza per person is a good amount when determining how much many pizza to order from Costco.

Board members distributed flyers to all local clubs. In addition, I mailed flyers to clubs as far as Long Beach. The ACBL Club Finder is very helpful for this. Punch in a city or zipcode in the web application to bring up all clubs in order of increasing distance. Click on a club to bring up its address and schedule. Send more flyers to clubs with more games per week.

Table tallying notes: Saturday had two half tables in the 199er pairs; I rounded the morning down and afternoon up.