One member, one vote?

At the unit level, each member votes for unit board members. Many units use mail-in ballots. A few units, including the La Jolla unit, hold an annual membership meeting, which in practice significantly favors the unit members who attend unit games because they are more likely to show up at the membership meeting to vote.

Any semblance of fairness disappears at the national level where all significant policy decisions are made. Representation is far from equal. Each district has one vote on the national board of directors (BoD) but district populations, shown in the table below for March 2016, vary from slightly over 3,300 to just over 20,000 (D9 – Florida). The five districts with ~3,500 members have about six time the voting power on a per capita basis as an ACBL member in Florida. The situation isn’t quite as bad as the U.S. Senate where a Wyoming resident has over 60 times the representation as a California resident but it is not a disparity we should tolerate.

Redistricting is the logical way to fix the serious representational inequity at the national level. But let’s not stop there. We might as well kill two birds with one stone. Last June Bob Hamman circulated a letter titled Ensuring the Future of Bridge which specified, “streamlining the decision process by reducing the size of the board to say 8 – 12 people,” as the first of eight recommendations. There is also a story running around that Warren Buffet, who is both very wealthy and a bridge player, declined to work with the ACBL, presumably in terms of funding technology or education initiatives, as soon as he learned the size of the ACBL BoD, knowing from long experience that boards of the current size (25) are ineffective.

Board size reduction is no longer just an outsider fantasy. A nine person committee met at the Reno NABC this spring to discuss the matter. The participants supposedly included three national board members, CEO Robert Hartman, the chairman of the board of governors, the ACBL League council, Peter Rank, and three others. The topic was deemed so sensitive that the remaining 22 board members were not even allowed to listen to the proceedings in silence. This secrecy could come back to haunt the committee—people in power seldom vote to eliminate themselves without a clear understanding of the benefit. 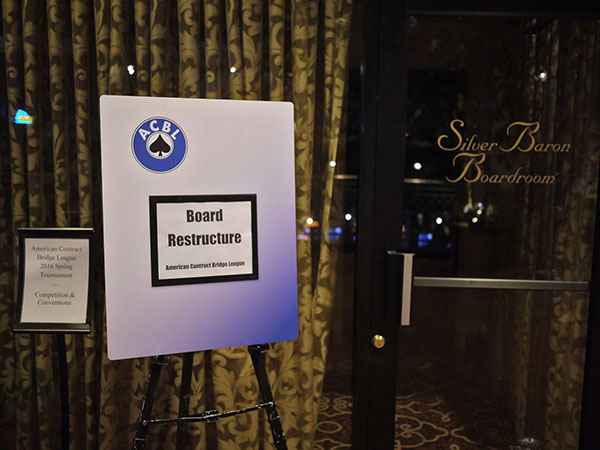 An odd number of board members prevents ties. So let’s shoot for a reduction to nine board members. This is a mathematically pleasing plan. Bridge players can be real squares, a fact curiously echoed in our current number of districts, 25 = 52. After a reduction of 42 = 16 districts, we will be left with a lean mean fighting machine of 32 = 9 board members, representing just nine equally populated districts.

The current district map is shown below. 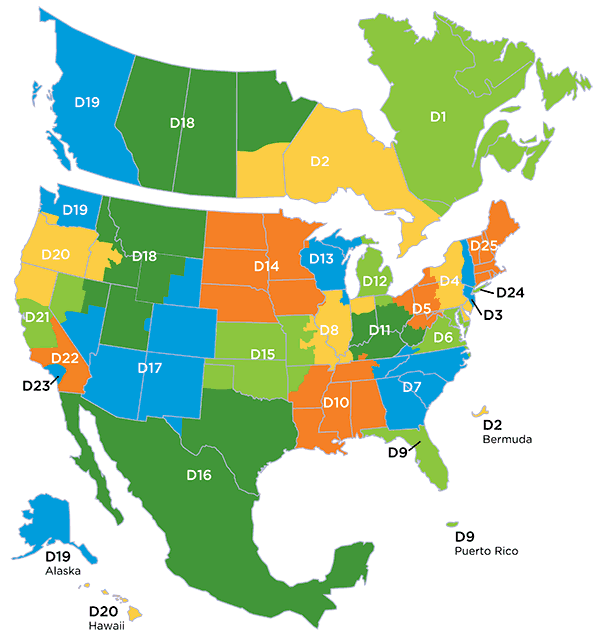 The target size for our new districts is 18,500 members. To the most reasonable extent possible our new districts should be contiguous and compact, standard criterion for constructing political districts. We should also minimize the disruption, severe though it may be, and try to preserve regional characters. I present the following proposal. 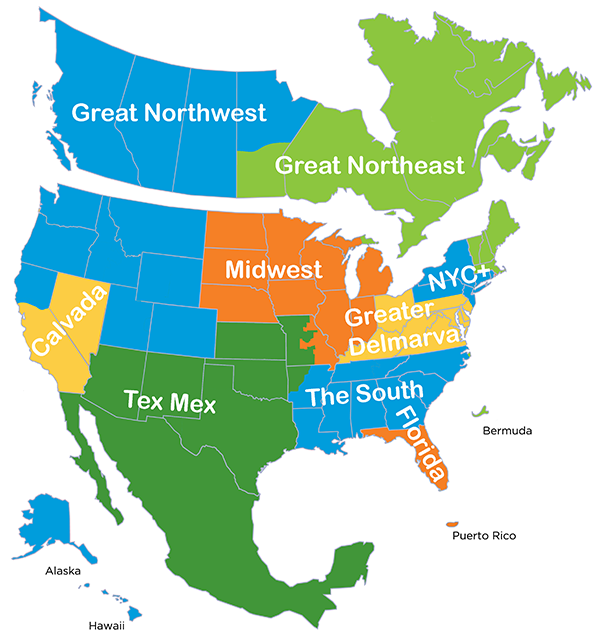 The thought process that went into this proposal is:

A smaller board would be able to make decisions quicker, including important current issues regarding the budget, transparency, technology issues, addressing the cheating scandal head on, managing the slow crisis of the aging membership, and the marketing of our game to future generations.

The votes of each board member would be more consequential and therefore subject to more intense scrutiny. Board members would be held to a higher level of accountability. Certain long standing abuses, for example the inherent conflict of simultaneously serving on the ACBL BoD and the World Bridge Federation (WBF) Executive Council, as is currently the case for Alvin Levy (D24) and Georgia Heth (D8), and Merlin Vilhauer (D20), might be curtailed and also be less desirable as the BoD work would be more consuming.

Board expenses, which are considerable, would be reduced. Alternatively, it may be possible to meet more often, e.g. at the very large Gatlinburg regional, which would most likely be attended by a majority of the board even without official business to conduct. Fewer board members means fewer technological hold outs. Video conferencing technologies such as Skype may be helpful in holding short meetings between the longer meetings at the NABCs in order to advance business quicker.

Some micro-managing by the board would be eliminated simply because there wouldn’t be time for it.

The board has a lot of committees. Out of necessity non-board members would need to participate in some of those committees. My guess is that many ACBL members would be willing to serve in such a capacity in order to contribute to and influence matters they are passionate about.

Currently, the Grass Roots events, the North American Pairs (NAP) and Grand National Teams (GNT), are tied to the concept of a district. Reducing to nine districts would significantly change the nature of those events. I propose tasking district boards to create and periodically redistrict three regions within their district for the purpose of the Grass Roots events. To encourage the districts to do a fair job, one might include a provision to kick the internal districting up to the national BoD for review if say 5% of a district's members sign a petition requesting such.

A sense of urgency

Ken Monzingo has been my national BoD representative for seven years. I think he has been a great bridge administrator and I mean this sincerely. I have been a unit president for four years and this have given me an appreciation for what is required just to keep the show going. I suspect those responsibilities are piled on high and deeper at the district level and I am absolutely sure they are piled on much higher and deeper at the national level.

I am with Ken about half the time on policy issues. What I don’t share with Ken is a rose tinted, platitudinous, view of certain real problems. And I am disappointed with the emotionalism with which he obscures issues where I am very much in agreement with him, because I think the emotionalism is hurting our collective cause.

Let’s get some things done.

Ken is disgusted with pros involved in the high level cheating scandal. I am too. Let’s take action. The ACBL has a detailed Code of Disciplinary Regulations. The video and statistical evidence is overwhelming and the ACBL would have no difficultly acquiring pro bono statistical consulting help from its membership. Throw the book at the cheaters. Expel the offenders for 20 years and make it clear the expulsion will not be commuted to less than 10 years under any circumstance. And ban the offending pairs from playing as a pair for life. Don’t wait for the WBF. Lead in ACBL-land. If the WBF imposes a harsher sentence, fine. In they appear to be leaning towards a weaker sentence, use whatever influence we have to encourage a strong penalty. No need to insinuate that most of the pros are cheating. Just get the job of justice done with all due haste, sending a strong message to the other pros.

Ken thinks we should focus recruitment on the baby boomers rather than the juniors, many of whom are children of pros and therefore likely to be highly polarized about bridge, in other words likely to strongly embrace or reject the game regardless of any ACBL expenditures on them. I largely agree. Let’s get it done. It only takes one motion to reallocate the funds. (I would like to continue volunteer school teaching as much as possible, for which the major cost to the ACBL is supplying the ACBL Bridge Series books which is just a printing expense because the ACBL holds the copyright.)

Transparency is primarily a matter of will rather than resources. Even something as complicated as the ACBLscore+ debacle might be well investigated by a single ACBL member properly empowered by the board and compensated for airfare and week of lodging in Horn Lake. I think it would be easy to get a volunteer from the Bridge Winners community if the board does not want to do the work itself. Let’s get it done.

Ken has raised many concerns about the non-transparent nature the manner in which the ACBL helps fund the WBF, in part through a $1 per ACBL member annual WBF membership paid non-transparently through a “Dues and Subscriptions” board of directors expense on the ACBL annual financial statement. I am more generous than Ken in the extent to which I feel the ACBL should support world bridge. But let’s do it transparently and have the board openly declare what level of funding they feel is appropriate. Again legislative will rather than extensive resources, are required. Let’s get it done

Maybe a smaller board will get it done!

I’m in my forties. I hope there is a national bridge organization, whether the ACBL or a replacement, in another thirty or forty years. I think as an organization we are at a transition point where bolder quicker action needs to replace steady as she leaks. I don’t expect all problems to be quickly solved, for example the technology issues can’t be solved immediately. But let’s get done quickly what we can and hasten that which takes time.