At the January 22, 2017 unit game, president Matthew Kidd presented the fourth annual President’s Awards. These awards are based on the unit game results for 2016 and emphasize partnership performance rather than individual performance. 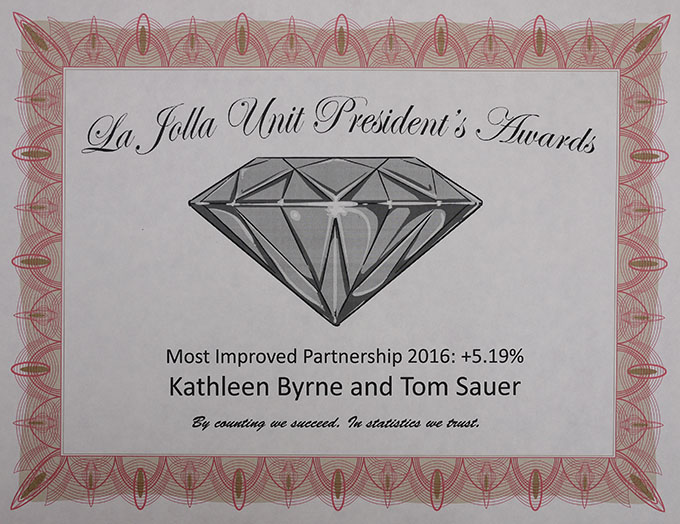 The full set of awards given are listed below:

Best Game is straightforward. Ron and Mary Huffaker started strong at the first unit game of the year on January 10th and were never surpassed though Elaine Chan and Mike Mezin came close with their 71.15% game on July 24th.

Kent Hartman and Maritha Pottenger won best partnership for the third year in a row with a 56.96% average, returning to roughly their 2014 average of 56.40%, after a spike to 59.37% in 2015. Bill Grant and Lynne O’Neill put up a good fight with their 56.68%. Arguably, Judy Rimer and Lynne Feldman did better than Kent and Maritha with their 60.23% average, which though averaged over only four games, is consistent with their performance in previous years.

The Most Improved Partnership compares 2016 performance against 2015 performance. Kathleen Byrne and Tom Sauer zoomed up 5.19%, comparable to the winning improvements seen in 2014 and 2015. Also improved were Kathie Angione and John Lagodimos, up 3.83% in 2016, Kathleen Hennessy and Tom Tatham (3.33%), and Paul Alesu and Robert Brobst (2.18%).

Barbara Norman and Chuck Wilson won the Most Consistent Partnership for the third year in a row with a standard deviation of 3.91% over 19 games, similar to their 4.03% in 2014. It appears their freakish 3.58% in 2015, which is below the theoretical long term minimum observed in Partnership Variability, was a downward fluctuation. The partnerships of Dan Dayani and Bette Cornelius and Andy and Patricia Loh were lower at 3.64% and 3.43% respectively but these results are based on a statistically poorer 9 games each and the Lohs won Wildest Partnership in the preceding year, a poor Bayesian prior.

Elaine Chan and Mike Mezin won Wildest Partnership with a shocking standard deviation of 8.81%, the topsy-turviest partnership since Kent Hartman and Maritha Pottenger’s 9.15% performance in 2013. Runner ups include the partnerships of Kathie Angione and John Lagodimos at 7.73% and Freda Anderson and Gail Dunham at 7.08%.

Best Attendance is straightforward. Freda Anderson, who won last year with a perfect attendance and shared the award for the two prior years, slacked off in 2016. This cleared the way for a four way tie among Alice Lane, Sue Kane, both previous winners, and Bob Brobst and Barbara Blake, current board members.