At the January 11, 2015 unit game, president Matthew Kidd presented the second annual President’s Awards. These awards are based on the unit game results for 2014 and emphasize partnership performance rather than individual performance. 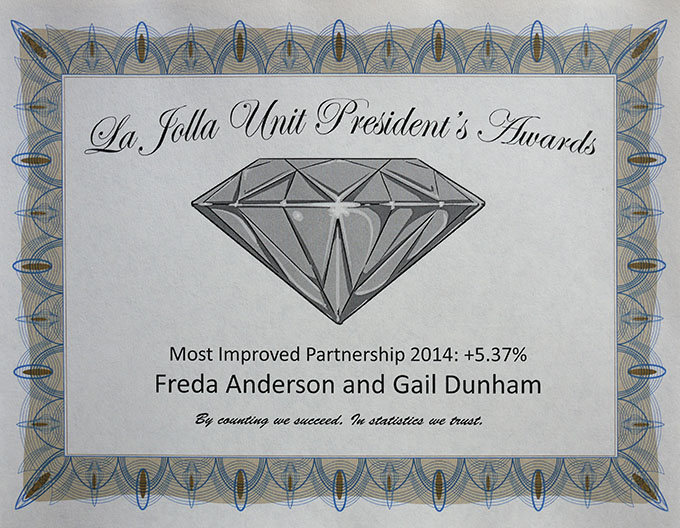 The full set of awards given are listed below:

Best Game is straightforward. Bill Grant and Lynne O’Neill held the lead for half the year with a 70.04% game in February though Everett Boyer and Greg House took a shot at them with a 69.68% in May. But Andy and Patricia’s 70.53% game in September was untouchable.

George and Kathee Bessinger won the Best Slam Partnership for the highest average number of slams bids and made per session. See Slam Statistics for more about this. Close behind were the partnerships of Elaine Chan and Mike Mezin and Sam and Yoko Jordan, both averaging 0.81 slams per session.

The Most Improved Partnership compares 2014 performance against 2013 performance. Freda Anderson and Gail Dunham zoomed up 5.37%. Wow! This is huge for a partnership average over 17 sessions in 2013 and 18 session in 2014. By comparison, Barbara Norman and Chuck Wilson won this category last year with “only” a 2.71% improvement. Also improved were Mac Busby and Steve Johnson, up 2.55% in 2014.

Barbara Norman and Chuck Wilson won the Most Consistent Partnership. Their low standard deviation of just 4.03% is close to the theoretical minimum observed in Partnership Variability. George and Kathee Bessinger were even lower 3.77% but this based on only 10 sessions rather than the robust 22 attended by Barbara and Chuck. Larry Sherman and Ying Lin Gu also do well in this category at 4.13%. Andy and Patrica Loh also won Wildest Partnership with 7.71%; it is not surprising they won Best Game on an upswing. Still this is much less wild than the 9.15% the Kent Hartman and Maritha Pottenger achieved in 2013. In 2014, Kent and Maritha reeled in their wild ride to a sensible 5.48% standard deviation.

Best Attendance is straightforward. Freda Anderson missed only one session in 2014—the day her 2013 attendance award was presented! She shares the 2014 award with Sally Ishihara and Sue Kane.

For 2013, the Best Pair-Pair Overperformance went to Freda Anderson and Gail Dunham who seemed to “own” Alice Lane and Dorinda Lindvall, doing about 17% better on average than expected over the 17 boards they played against these opponents during the year. This drubbing continued in 2014 but the tormentors slipped to a 13.49% overperformance. My advice to Alice and Dorinda is to try and sit the same direction as Freda and Gail so as not to meet them. My advice to Freda and Gail is exactly the opposite. But in 2014, it was the dynamic pair of Kent Hartman and Maritha Pottenger who held both ends of the Pair-Pair Overperformance awards, performing 18.92% better than expected against Kathleen Hennessy and Tom Tatham and 18.83% worse than expected against Morton and Eileen Heinrich.