Anyone can play all day and all evening and collect a few masterpoints along the way. It’s much more enlightening to examine average partnership performance in a regular game. The ACBL can’t do this because they don’t have all the data. However, ACBLscore game files contain all the necessary data. I have written software called the Payoff Matrix that generates statistics for players, partnerships, and partnership interactions by directly reading ACBLscore game files. The output of the software is a set of tab delimited text files that can easily be viewed in a spreadsheet.

It is most useful to look at regular partnerships that play in enough sessions to generate decent statistics. For the nearly two year period from the start of January 2012 through the end of November 2013, a 10 session minimum cut reduces the number of partnerships to a manageable 37. Dave Oakley and Dave Walters lead the pack with a 56.96% average, followed by Mary and Ron Huffaker (56.15%), Suzanne Lebending and Roger Doughman (55.73%), and Steve Johnson and Mac Busby (55.49%). However, one can not state with certainty that any partnership is better than another but rather only state a degree of confidence that this is the case based on difference in average percentage and the error on each partnership’s average percentage. For example, Dave and Dave lead the Huffakers 56.96 ± 1.56% to 56.15 ± 0.97%. We must ask how confident we are that (56.96 − 56.15) = 0.81 ± 1.84% is greater than zero where the errors from each partnership have been added in quadrature. 0.81% is 0.44 standard deviations (0.81 / 1.84) away from zero. We can calculate the confidence using the error function; for example via 1 − erfc(0.44/sqrt(2)) / 2 in Matlab which yields 0.67. From this we can say with about 67% confidence that Dave and Dave are a stronger partnership than Huffakers. Similarly we can say with about 75% confidence that Dave and Dave are stronger than Suzanne and Roger. 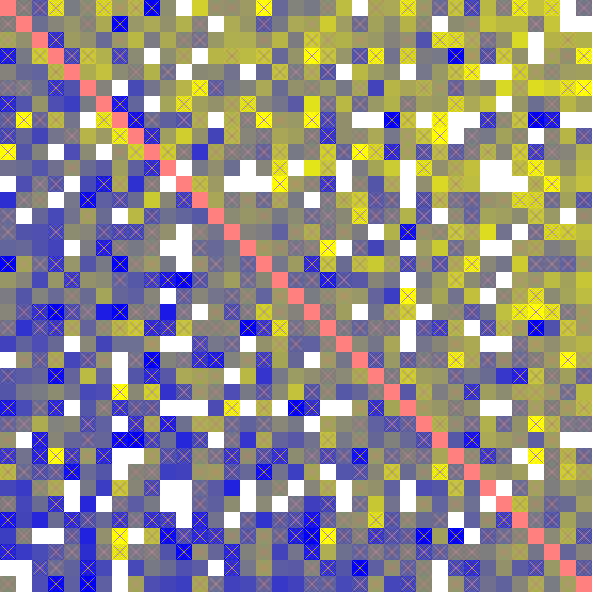 The upper right corner of the matrix is mostly yellow. This is because stronger partnerships usually have an advantage against weaker partnerships. Conversely the lower left corner is mostly blue. However, there are interesting exceptions. For example, both Emily and Barry Berkov and Hanan Deeby and Bernard Figueiredo seem to cross up Suzanne Lebendig and Roger Doughman. Freda Anderson and Gail Dunham seem to cross up Elaine Chan and Mike Mezin as well as Mary and Roy Green but are troubled by Carolyn Casey and Lena Jelusich. Matthew Kidd and Trish Lane cross up Steve Johnson and Mac Busby as well as John Lagodimos and Kathie Angione only to lose to Ray and Alan Rowen. Fumie Graves and Joel Hoersch vex Rex and Sheila Latus. Mary and Roy Greene have it out for Marty and Leila Bloomberg. Stephen and Jill Seagren are beating up Lynne Anderson and Ursula Kantor.

But does it really work this way? Let’s look at some data. 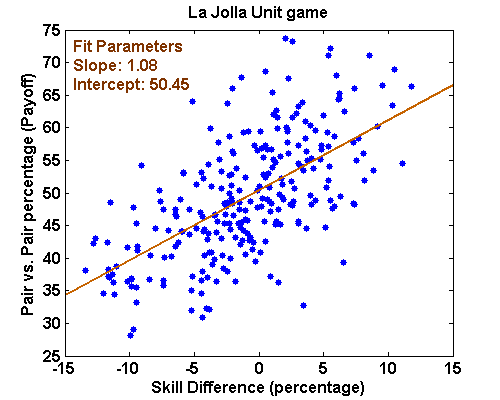 Each point represents a partnership interaction where the two partnerships have played at least 10 boards against each other, that is it represents one of the bluish-yellow squares from the preceding figure which is not flagged by a little red X. There is a lot of scatter due to limited statistics and also the peculiarities of how one partnerships interacts with another. Nonetheless, the slope for the best fit is close to 1. This means for example that a partnership that does 5% better than another partnerships against the field, will on average achieve a 55% result against the weaker partnership. More generally it supports our expectation of how partnership-partnership performance should work.

An intercept of 50.45% instead of exactly 50% might seem concerning. This is an artifact from restricting the dataset to the interactions of the most established partnerships instead of all partnerships and also due to a failure to weight the linear fit by the error on each data point. Folding in all the low confidence partnership interactions would fix this issue but at the cost of a very messy plot. The fact that the slope at 1.08 deviates slightly from 1 is more interesting. This is permissible though it may also be an artifact. For the under/overperformance visual matrices below and the downloadable dataset, we will stick with our simple initial model where we assume the true slope is 1.

The matrix below corrects for the difference in partnership skill, showing how much each partnership overperforms or underperforms against another partnership. The blue to yellow scale runs from -30% to 30% with grey at 0%. Move the mouse of the image to view the details for each square (matrix element). As before the partnership names and average percentage are shown. The over-perform / under-perform percentage is shown in bold. The ordinary percentage from the previous figure is also shown. Note: the previous figure also shows the over/under-performance statistics after ‘OU:’ as in ‘OU: 9.7%’. 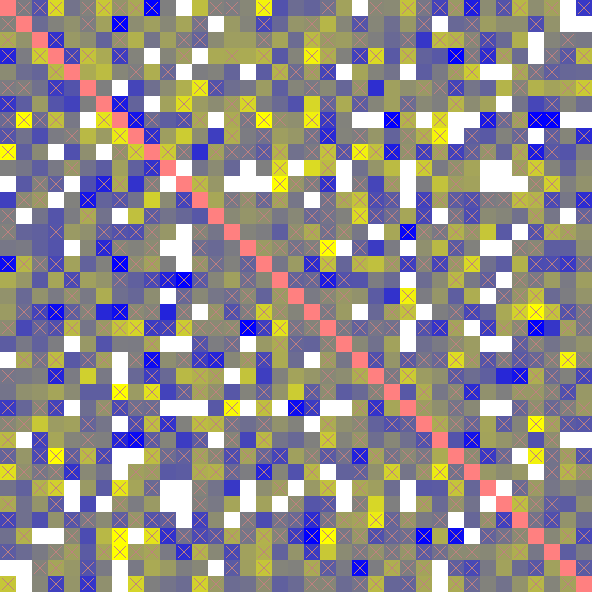 I have also created the payoff matrix for 2010-2011. This dataset includes the full 24 months instead of the 21 months in the 2012-2013 dataset. A 12 session minimum cut reduces to 42 partnerships. The red X flagging was raised to 12 or fewer boards. During 2010-2011, Debbie and Alan Gailfus, who were La Jolla Unit members back then, come out on top with a stunning 59.09% average. Their 59.09 ± 1.89% versus Dave and Dave’s 57.05 ± 0.89% means we can state with 85% confidence that they were the stronger partnership during this time period. The Gailfus partnership variability was also quite high at 7.57%, higher than any of the other 41 partnerships, and significantly higher than the 6% average variability.

A few off diagonal pink squares appear because some players had two regular partnerships during this time period. Mac Busby did well with both Suzanne Lebendig and Greg Chaffee. Fumie Graves played with both Murray Goldman and Joel Hoersch. Yoko Davis, now Yoko Jordan, played with both Sumiko Inagaki and Sam Jordon. The Payoff Matrix software is not thrown off by the name change because it use the ACBL player number whenever possible and converts the life master letter to the corresponding digits to avoid duplicating an individual when they become a life master. 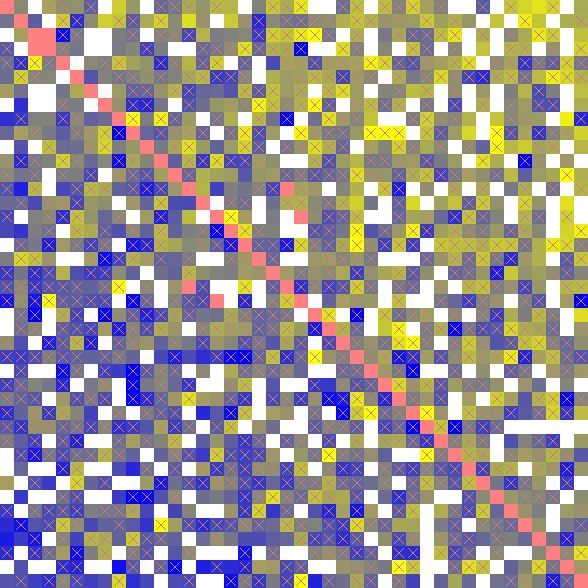 Switching to the over/underperform matrix below, we see Debbie and Alan Gailfus destroying Peter Lagodimos and Tom Tatham and significantly damaging Freda Anderson and Gail Dunham. Dave and Dave stuck it to Ray and Alan Rowen, Fumie and Joel, and Freda and Gail. Chuck Wilson and Barbara Norman were surprisingly good against Greg House and Maritha Pottenger and similarly Freda and Gail against Bill Grant and Lynne O’Neill. Alice Lane and Sandra Schumsky had a good track record against Freda and Gail. Emily Berkov and Barry Berkov vexed Hanan Deeby and Bernard Figueiredo. 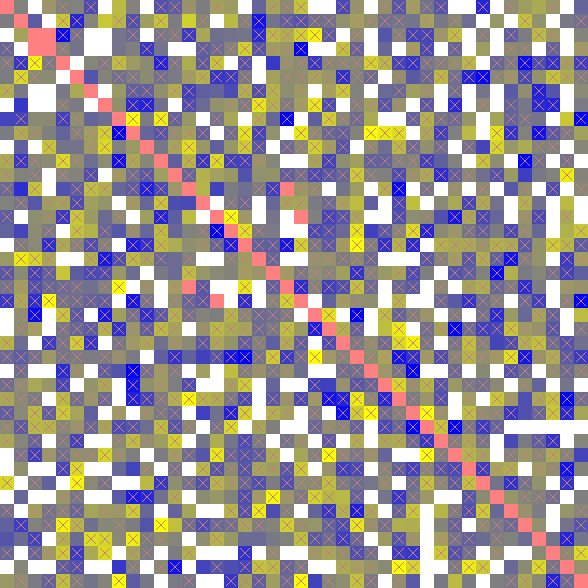 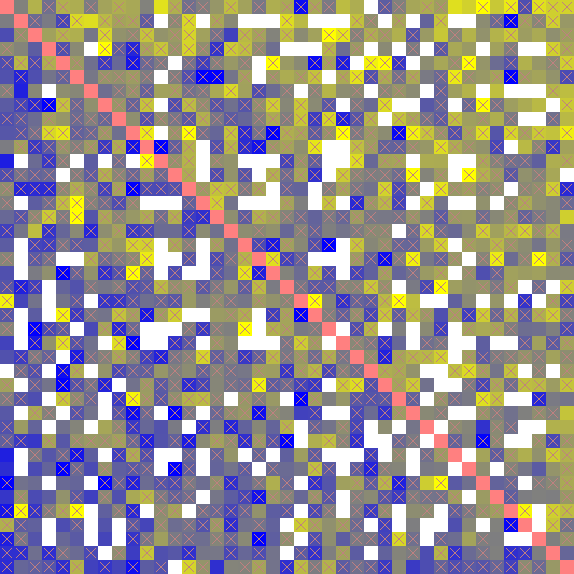 Switching to the over/underperform matrix below, the Gailfuses pounded the Huffakers. Steven Johnson and Diana Marquardt beat up on Bill Grant and Ed Layton. George Bessinger and Kathee Farrington vexed Hanan Deeby and Bernard Figueiredo. Manoochehr Bahmanian and Sally Ishihara did well against strong pairs only to give it back to weak pairs. 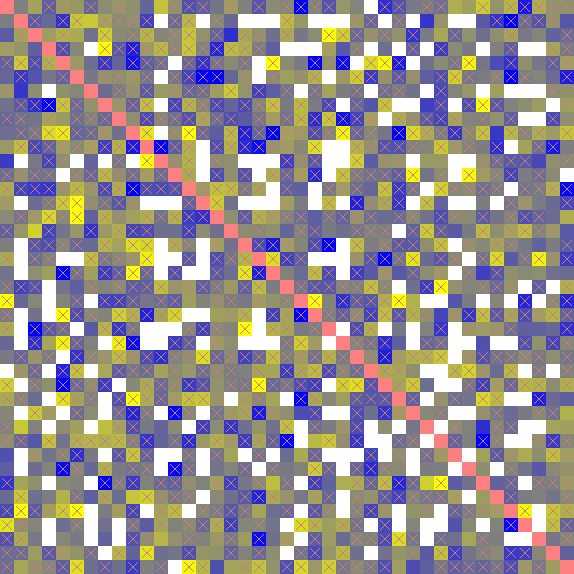 Below are the payoff matrices for 2008-2013, almost six years of unit game play. A 26 session minimum cut reduces to 48 pairs. The red X flagging is set for 16 or fewer boards. 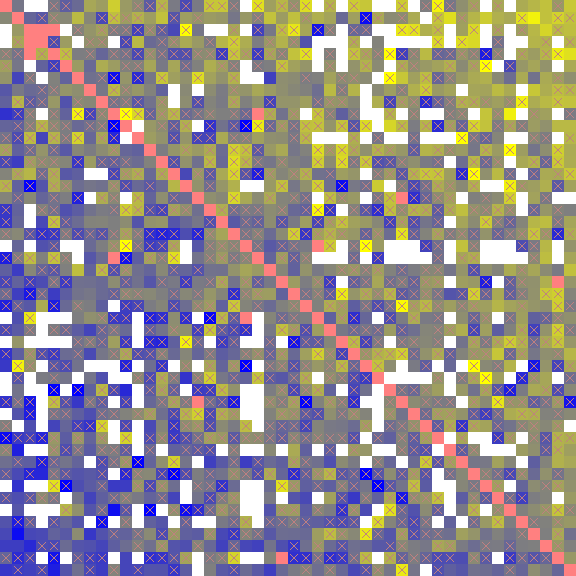 Download a zip file (5 MB) of all the tab delimited text files created by the Payoff Matrix software and used to generate the payoff matrix images above. For convenience, an Excel version of each file is also included. A filename such as U526-2010-2011-min-12-payoff-matrix.txt means the payoff matrix data for the 2010-2011 time period after restricting to partnerships that have played at least 12 sessions. If min-# is not included in the filename, no minimum session cut has been applied. The definition of each column is explained in the Payoff Matrix software documentation. The zip file also includes the images and the image specific JavaScript files.