I introduced the Payoff Matrix concept last October and showed results for six years of the La Jolla unit game based on the output generated by the Payoff Matrix software. Here I present similar results for the 2013 calendar year for the Esplanade Club in San Diego. As usual, the data shown in the visual matrices is limited to regular partnerships who play in enough sessions to generate decent statistics but full data is presented in the tab delimited text files which are available as a download at the end of this page.

The Esplanade Club runs several sessions per week, both open and limited games. The following table shows the average field strength for each session in order of decreasing strength. The 2013 La Jolla unit and San Diego unit open games are also included for comparison.

The Esplanade payoff matrices are presented below in the order of decreasing field strength according to the table above. 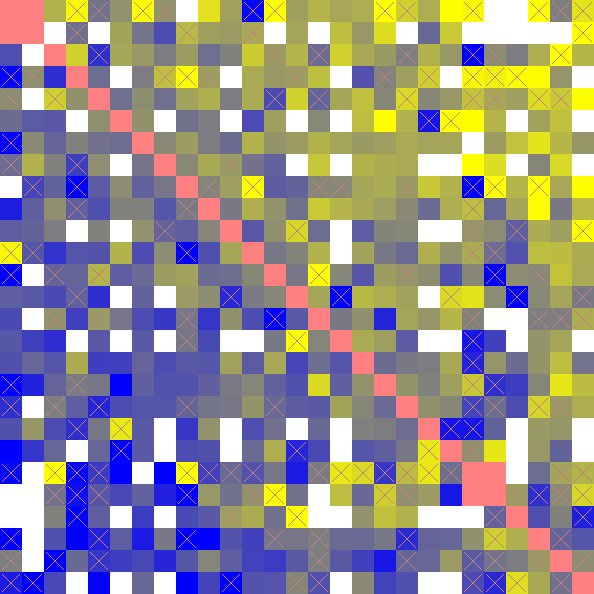 The upper right corner of the matrix is mostly yellow. This is because stronger partnerships usually have an advantage against weaker partnerships. Conversely the lower left corner is mostly blue. However, there are interesting exceptions. For example, Ginger Calvert and Cheryl Rodzach cross up Christine Denny and William Bidermann.

The matrix below corrects for the difference in partnership skill, showing how much each partnership overperforms or underperforms against another partnership. The blue to yellow scale runs from -20% to 20% with grey at 0%. Move the mouse of the image to view the details for each square (matrix element). As before the partnership names and average percentage are shown. The over-perform / under-perform percentage is shown in bold. The ordinary percentage from the previous figure is also shown. Note: the previous figure also shows the over/under-performance statistics after ‘OU:’ as in ‘OU: 9.7%’.

The more yellowish and bluish square in the second matrix above are interesting because they indicate a pair that is strongly over/underperforming against another pair. The following table lists these relations in descending degree of payoff (or “exploitability”) where the pair-pair percentage is derived from at least 16 boards. Cnt is the number of boards that each interaction percentage based on.

The table gives us much to speculate about and yet it is still a lot to absorb. Part of the difficulty is that many pairs are listed multiple times. A graph may be a better representation. Here is an example: OU ≥ 6%, where the graph represents the data in the table above down to advantages as small as 6%.

It should be noted that although these are directed graphs, they are not directed acyclic graphs (DAGs), an important and well studied class of graphs. Cycles are easy to spot. For example Lynn and Janice Wells payoff to Mary Woo and Roberta Massey who payoff to M Ali Mahdavi and Nicholas Krall who payoff to Rashad Ansari Jeffrey Leach who complete the cycle by paying off to Lynn Wells Janice Wells. So turns the wheel of exploitation.

Scientists and mathematicians may be concerned about the fact that inflow and outflow are not equal at each node (pair) given that the over/underperformance numbers have compensated for the difference in partnership ability. There are two reasons for this. First, only the most prominent and statistically confident payoffs are shown. Many smaller payoffs are suppressed in order to avoid total clutter. Second, the payoff calculations are based on different numbers of boards. For example, an underperformance of 3% over 40 boards would be balanced by a overperformance of 6% over 20 boards.

The straight up and over/underperformance matrices below list the partnerships in order of decreasing strength for partnerships who played at least 7 sessions in 2013. Nicholas and Diane Krall (55.96% from 7 games) barely edge out Spencer Emtage and Afick Sharar (55.57% from 15 games), with Paul Foster and Sandy Kucha (55.28% from 15 games) in third place. These are close results. Statistically we can only say with 58% confidence that the Kralls are better than Spence and Afick in this game. Best Thursday evening game of the year goes to Lance and Anne Malkind, one time visitors who walked away with a 71.5% game. 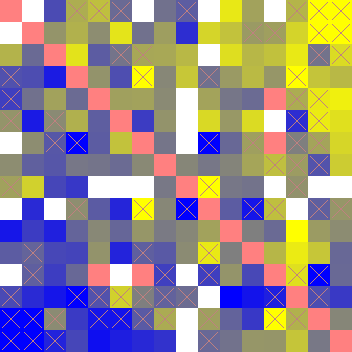 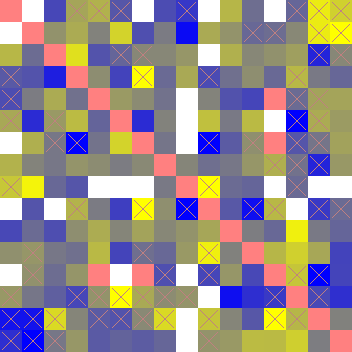 Here is the Over/underperformance table where the pair-pair percentage is derived from at least 16 boards and OU ≥ 4 is shown. Cnt is the number of boards that each interaction percentage based on. Or view the graph.

The matrices are limited to pairs who have played at least 10 sessions. John and Rima Sharron lead the Wednesday afternoon game with a 58.09% average over 24 games. But they are closely followed by Larry Sherman and John Sack (57.63% over 18 games), a pair seasoned for several years by the often tough Soledad Thursday night game. Statistics only allows us to assert with 67% confidence that the Sharrons are the better pair. In third place, significantly behind is the partnership of Jan Gallagher and the late John Devine (55.85% over 24 games), allowing us to assert with 82% confidence that Larry and John are the better partnership. 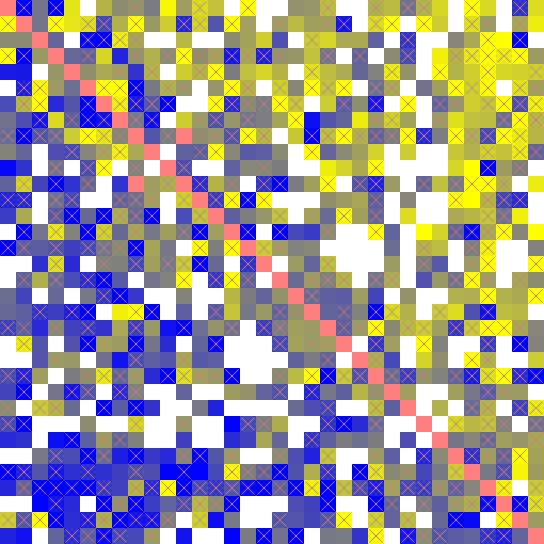 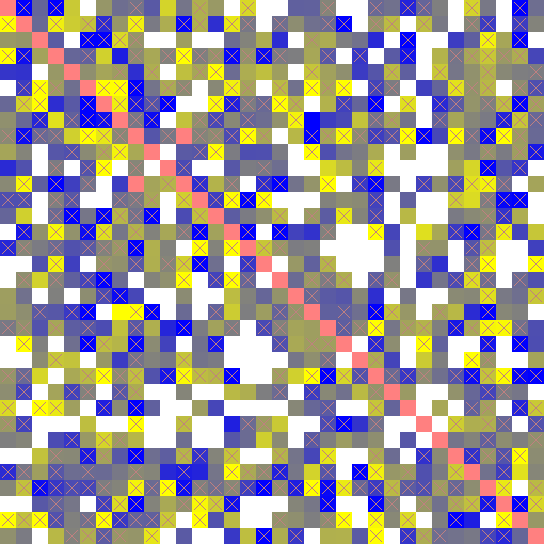 Here is the Over/underperformance table where the pair-pair percentage is derived from at least 20 boards and OU ≥ 4 is shown. Cnt is the number of boards that each interaction percentage based on. Or view the graph. 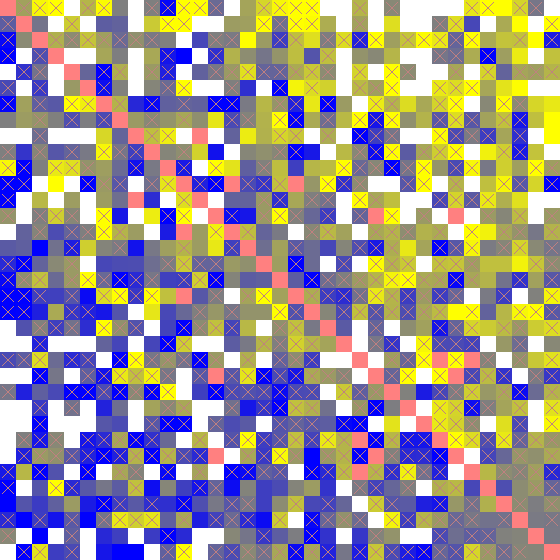 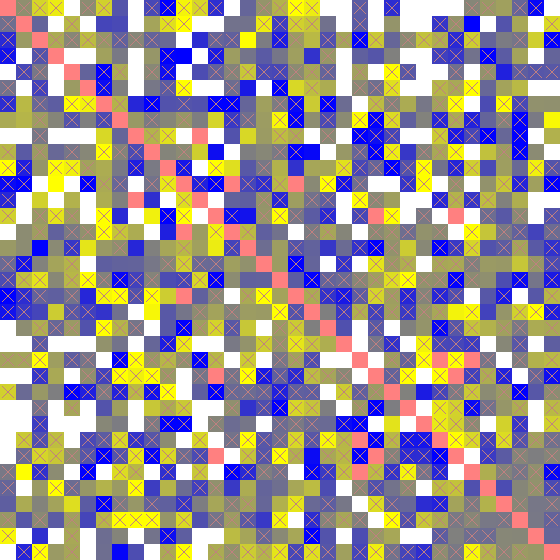 Here is the Over/underperformance table where the pair-pair percentage is derived from at least 20 boards and OU ≥ 4 is shown. Cnt is the number of boards that each interaction percentage based on. Or view the graph.

There is considerable overlap between the pairs in both morning 499er games. Therefore, it makes sense to create a single set of payoff matrices from the combined dataset. 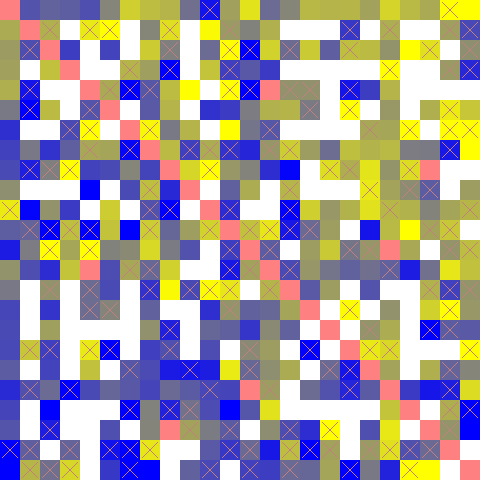 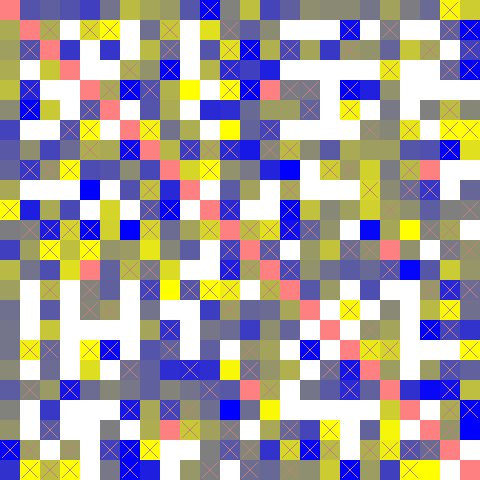 Here is the Over/underperformance table where the pair-pair percentage is derived from at least 20 boards and OU ≥ 5 is shown. Cnt is the number of boards that each interaction percentage based on. Or view the graph.

Download a zip file (1 MB) of all the tab delimited text files created by the Payoff Matrix software and used to generate the payoff matrix images above. For convenience, an Excel version of some files is also included. A filename such as Esp-2013-Wed-Aft-min-10-payoff-matrix.txt means the 2013 Esplanade Club payoff matrix data for the Wednesday afternoon session after restricting to partnerships that have played at least 10 sessions. If min-# is not included in the filename, no minimum session cut has been applied. The definition of each column is explained in the Payoff Matrix software documentation. The zip file also includes the images and the image specific JavaScript files.