I introduced the Payoff Matrix concept last October and showed results for six years of the La Jolla unit game based on the output generated by the Payoff Matrix software. Here I present similar results for the 2013 calendar year for the Eastlake Club in San Diego. As usual, the data shown in the visual matrices is limited to regular partnerships who play in enough sessions to generate decent statistics but full data is presented in the tab delimited text files which are available as a download at the end of this page.

The Eastlake Club runs several sessions per week, both open and limited games. The following table shows the average field strength for each session in order of decreasing strength. The 2013 La Jolla unit and San Diego unit open games are also included for comparison.

The Eastlake payoff matrices are presented below in the order of decreasing field strength according to the table above.

Club owner Kathie Angione and her regular partner John Lagodimos dominate the Wednesday evening game with a 59.17% average, well ahead of John and Linda John Dusharme’s 52.69% average in second place. Curiously, Kathie and John really take it out on John and Linda, scoring an almost 80% average against them over 13 boards. Nothing like demoralizing your closest rivals even if they are more than 6% behind you. The proles must be kept in their place.

Kathie and John also have far more masterpoints than any of the other regulars; without them the mean field strength would fall below 200 MP. In this case the geometric mean of 166 MP is a much more accurate indicator of the field strength. Not surprisingly Kathie and John are much better than the result of the field at a bidding and making slams (0.50 / session) though Cheryl Rankin and Carol Adair make an effort at 0.29 / session. But due to flighting and perhaps by sometimes flaggging themselves as Not Eligible (NE) in ACBLscore, John and Kathie did not haul in the most masterpoints. The Dusharmes won that race, collecting an average of 0.57 MP / session. But Judi Bunch and Hiroko Kitamura play more often and thus won the most masterpoints (13.60 MP) in this game during 2013. 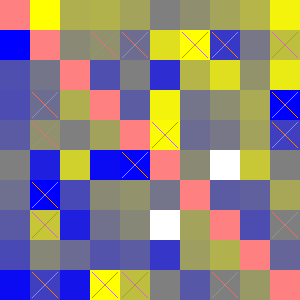 The upper right corner of the matrix is mostly yellow. This is because stronger partnerships usually have an advantage against weaker partnerships. Conversely the lower left corner is mostly blue. However, there are interesting exceptions, most notably the strong showing of Gary and Liz Piazzoni against Judi Bunch and Hiroko Kitamura.

The matrix below corrects for the difference in partnership skill, showing how much each partnership overperforms or underperforms against another partnership. The blue to yellow scale runs from -20% to 20% with grey at 0%. Move the mouse of the image to view the details for each square (matrix element). As before the partnership names and average percentage are shown. The over-perform / under-perform percentage is shown in bold. The ordinary percentage from the previous figure is also shown. Note: the previous figure also shows the over/under-performance statistics after ‘OU:’ as in ‘OU: 9.7%’. 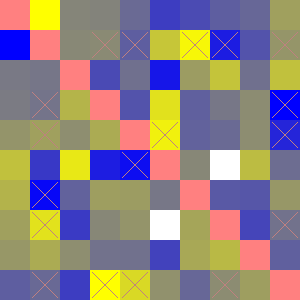 The more yellowish and bluish square in the second matrix above are interesting because they indicate a pair that is strongly over/underperforming against another pair. The following table lists these relations in descending degree of payoff (or “exploitability”) where the pair-pair percentage is derived from at least 20 boards. Cnt is the number of boards that each interaction percentage based on.

The table gives us much to speculate about and yet it is still a lot to absorb. Part of the difficulty is that many pairs are listed multiple times. A graph may be a better representation.

It should be noted that although these are directed graphs, they are not directed acyclic graphs (DAGs), an important and well studied class of graphs. Cycles are easy to spot. For example Judi Bunch and Hiroko Kitamura payoff to Thomas and Jim Ciolli who payoff to Cheryl Rankin and Carol Adair who complete the cycle by paying off to Judi Bunch and Hiroko Kitamura. So turns the wheel of exploitation.

Wednesday morning is a new story. James and Shay Andrews are clearly leading this game with a 59.61% average, ahead of Sharon Gordon and Kathleen Hennessy (56.54%) and Barbara Schafer and Hiroko Kitamura (56.49%). Kathie and John bring up fourth place at 54.61%. The Andrews are clearly an established partnership and James Andrews finished 2013 at about 3500 MP which is quite a large holding for an Eastlake game player. Statistical arguments identical to those in performed in Payoff Matrix writeups for other games allow us to state with 94% confidence that the Andrews are a better partnership than Sharon and Kathleen and with almost 99% confidence that they are better than Barbara Schafer and Hiroko Kitamura. The greater confidence in the second case despite the very similar percentage of the second and third place partnerships is due to the more consistent results of Barbara and Hiroko (σ = 1.03%).

The matrices below are limited to pairs that played at least 10 sessions in 2013. The red X flagging remains at fewer than 10 boards. 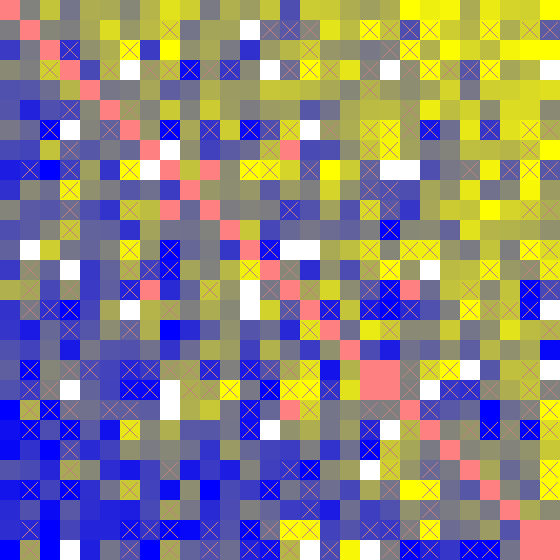 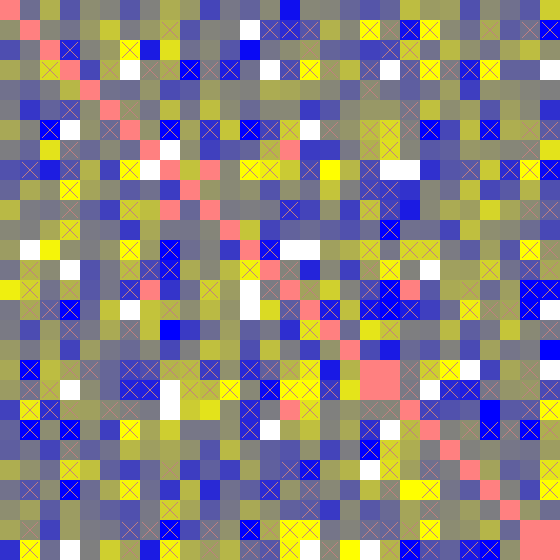 Here is the Over/underperformance table where the pair-pair percentage is derived from at least 20 boards and OU ≥ 5 is shown. Cnt is the number of boards that each interaction percentage based on. Or view the graph. It is interesting that the top pair, James and Shay Andrews, has so many large inflows and outflows. This suggests their top position is not secure.

Kathie and John again dominate this weakest of the Eastlake pairs games with a 65.71% average, way ahead of Barbara Schafer and Linda Dusharme’s 60.38% average and Judi Bunch and Martha Walker at 56.66%. But Kathie has always flagged her and John as Not Eligible (NE) in ACBLscore so they won no masterpoints for it. I think they only play in this game if it is necessary to prevent a half table.

The matrices below are limited to pairs that played at least 7 sessions in 2013. The red X flagging remains at fewer than 10 boards. 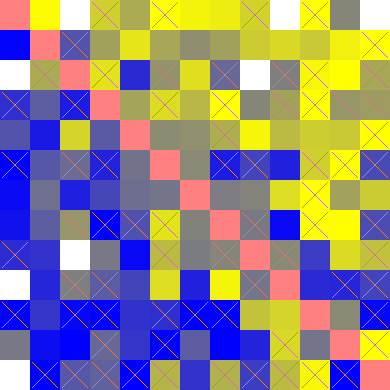 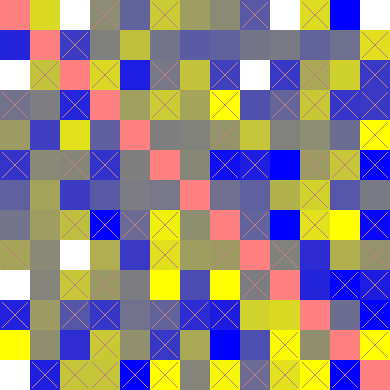 Here is the Over/underperformance table where the pair-pair percentage is derived from at least 16 boards and OU ≥ 4 is shown. Cnt is the number of boards that each interaction percentage based on. The corresponding flow graph is shown below the table.

Download a zip file (1 MB) of all the tab delimited text files created by the Payoff Matrix software and used to generate the payoff matrix images above. For convenience, an Excel version of some files is also included. A filename such as Eastlake-2013-Wed-Mor-min-10-payoff-matrix.txt means the 2013 Eastlake Club payoff matrix data for the Wednesday morning session after restricting to partnerships that have played at least 10 sessions. If min-# is not included in the filename, no minimum session cut has been applied. The definition of each column is explained in the Payoff Matrix software documentation. The zip file also includes the images and the image specific JavaScript files.