“Who do you think were the two best heavyweights who ever fought? I don’t really care who you pick, but take those two fighters, both at the peak of their careers, put them in a ring and let them slug it out for 15 rounds. Whoever wins is the champ. That’s IMPS. Now take the same two fighters, blindfold them and tie one hand behind their backs. Divide the ring diagonally with a solid barrier. Now go down to the local tavern and collect 20 drunks. Place 10 drunks on each side of the ring and let the fighters go at it. Whoever knocks out his drunks first is the winner. That’s matchpoints!”

The partnership statistics generated by the Payoff Matrix software provide enough data to investigate these questions. Let’s begin by looking histograms of the performance of several regular partnerships in the La Jolla unit game over the six year period from the start of 2008 through October 2013 as shown in the figure below, where partnership strength decreases from left to right. The shapes are roughly Gaussian, i.e. bell-shaped. The standard deviations are 5.70, 4.94, 5.53, and 5.64 percent from left to right.

As an aside, it is worth noting that the matchpoint results on any given board are not at all Gaussian. Because matchpoint scoring ranks all raw scores from top to bottom, regardless of how small the difference is in the raw score, e.g. +630 vs. +620, the distribution of matchpoint scores should be fairly uniform, i.e. flat rather than bell-shaped. However, the distribution is not absolutely uniform due to ties. For example, if the results on a board are +630, +620, +620, +620, and −50, the pair with the +630 score will receive a matchpoint score of 4 (a “top”), all three pairs with +620 will receive a score of 2 (an average), and the last pair will receive a 0 (a “bottom”). In this scenario, there is a spike in the matchpoint award distribution at 2 and no awards of 1 or 3 on the board. But over a large number of boards, ties will also occur near the bottom and top as well as the middle and the distribution is likely to end up fairly uniform. Still it is good to check actual data. The plot below shows the distribution of N-S matchpoint scores for all boards from a collection of 299er events during the first nine months of 2013 at the Charlotte Bridge Studio. To avoid binning effects, the data has been restricted to events with a matchpoint top of 7. 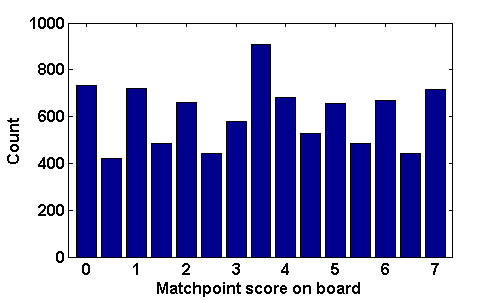 The variability of a partnership’s results can be broken down as the variability caused by the field and the variability caused by the partnership, i.e the intrinsic partnership variability. You have surely experienced field variability. One session, two or three opponents give you gifts, making mistakes that will not be replicated. When you bid a pushy slam, the opponents are put to a guess on the opening lead and fail to cash their two immediate tricks, giving you top instead of a bottom. Another session, nobody seems to give you any gifts. Even weaker pairs perform annoying competently at your table even though you know they’re still handing out gifts, just not to you. Better pairs take shots that happen to work. None of your results are terrible and all of them will be shared by several other pairs, and yet they all feel like slightly below average results and the final result bears this out.

Most field variability is due to randomness, i.e. it is field noise. To a lesser extent variability may be caused by poor seeding. For example, in a Mitchell movement the N-S and E-W directions should be balanced but if too many pairs request a N-S direction and the director is not vigilant, field balance can be thrown off. At other times, masterpoint holdings may not properly reflect skill, but the director may not compensate for this properly. Or significant disparities in skill may make field balance difficult.

Variability caused by a partnership comes from many sources. Alertness and focus vary from session to session, such that the partnership strength varies. Emotional factors may come into play. Bidding methods play a role, especially if a pair employs methods such as weak no-trump or even a full system such a Precision, that is not being used by most of the field. Bidding style can make a difference—a pair that makes many close “matchpoint” doubles or aggressive preempts will have more variable results. Nearly pure guesses in bidding or card play can cause additional variability; some decisions will split expert panels down the middle and even simulations may reveal that a given circumstance is a nearly 50-50 guess.

Partnership variability may also come from long term changes in partnership skill. Strictly speaking, this is a trend in the signal, i.e. the true partnership strength, rather than noise, i.e. random variability. It could be removed by some sort of detrending procedure, perhaps one as simple as a linear fit over time. The six year period covered by the La Jolla unit data is certainly long enough for partnerships to evolve significantly. However, if the La Jolla unit data is limited to just 2012-2013, the average partnership variability only falls by only 0.01%, suggesting that changing partnership skill is not a significant factor in the analysis. This isn’t necessary surprising. Most partnerships do not span the entire six year period. Moreover the La Jolla unit game is fairly strong; many of the participants were already experienced players in 2008 and so have less room to improve significantly since then.

What does field standard deviation of 4% mean in practice? It means that 32% of the time, your result is 4% higher (or lower), than your actual performance, i.e. one standard deviation away. Here is a little chart that shows the influence of the field in more detail.

What makes for a partnership with low intrinsic variability? I know something about Bill Grant and Lynne O’Neill, a strong partnership with an intrinsic variability of about 3%. Both are calm people who play a logical game. They are aggressive in the bidding when the vulnerability merits it but their bidding system is very ordinary. Lynne’s bidding is so old that she even plays Strong Two bids with some partners, though not Bill who enjoys some aggressive preempts. My opinion is that they gain more from solid card play than sophisticated bidding. I also know something about Lynne Anderson and Ursula Kantor, because I’ve played a lot with Ursula. They are both calm people. Ursula’s bidding is pretty basic. She will almost never miss a game (1♠ 2♠ 3♠—self alert; theoretical invite that will never be passed! 4♠) and is quick to run to 3NT even with distribution that might give slam a chance if her shape were bid out. Her contracts are seldom anti-field.

I’m curious why the Manoochehr Bahmanian–Sally Ishihara and Joyce Bailey–Barbara Blake partnerships have the highest intrinsic variabilities at 5.7% and 6.4% respectively. I don’t know either partnership well but I do think Sally’s game has improved significantly over the 2008-2013 time period analysed; a trend may be masquerading as variability.

One might expect strong partnerships to be more disciplined and thus perhaps to have less intrinsic variability. And yet even a casual glance at the spreadsheet suggests otherwise. Consider Maritha Pottenger’s partnerships with Greg House (56.25 ± 1.04%) and Kent Hartman (54.21 ± 1.28%). Both partnerships are respectable and yet their intrinsic variabilities are wildly different at 2.1% and 5.6% respectively. Let’s look at some scatter plots.

At first glance, hardly any correlation is evident. Let’s check this more closely by binning the data in 4% bins. The error bars shown are errors on the mean value for the bin. Only one pair in the La Jolla unit game falls in the 58-62% bin so there is no error bar on that bin. In the strong game, there is no evidence of reduced partnership variability after the first bin, with the intrinsic variability seeming to approach a floor at 3%. However, the 199er and 299er combination shows a downward trend towards 4%, meeting the variability at the weaker end of the stronger La Jolla unit game.

Variability as a strategy

To victor go the spoils. In matchpoints, the top flight A masterpoint award scales linearly with the number of tables in play and is further adjusted by the game type, e.g. an ordinary club game, unit championship, a charity game, etc. The second place award is 70% of the first place award and third place is 50% of the first place award. This applies similarly to flight B and flight C but the top awards are based on fewer tables, as determined by the total number of pairs in flight B and C, and just in flight C respectively. A partnership in flight A will collect far more masterpoints if it alternates between 50% and 60% sessions than if it consistently scores 55%. It’s more complicated for a partnership in flight B but in general variability is a good strategy if masterpoints are the goal. If some of your partnership variability is caused by emotional issues, work on that since it will pull your percentage up. But you might want to keep your aggressive preempting style, weak no-trumps, crazy slam bidding, or whatever else your partnership does to generate variability as long as the actions are not anti-percentage, at least not significantly so.

My regular partner Trish Lane asked me if married partnerships are more variable than other partnerships. “Wouldn’t you think, looking at some of them?” was her guess. Books have even been written. I recommend Roselyn Teukolsky’s humorous How to Play Bridge With Your Spouse… and Survive even if you are not in a married bridge partnership.

Poker is maddeningly variable. One bad beat for a big pot might wipe out a night of competent play. In an aggressive game it can be hard to tell for awhile whether one is playing well or lucky or conversely playing poorly or unlucky. Compared to poker, Hamman’s complaint about matchpoints seems picayune.

David Sklansky and Mason Malmuth have written a lot about poker. They even have their own press, Two Plus Two. Years ago Sklansky wrote an article about the balance of skill and luck in poker. If it were solely a game of skill, the inexperienced wouldn’t play because they would lose every time. If it were too much about luck, the professional players would give up. Sklansky argued that No Limit Texas Hold’em went too far in the direction of skill. Bridge is a game of considerable skill. If we want to keep the tournament game alive we may need to embrace the degree of luck rather than shun it.